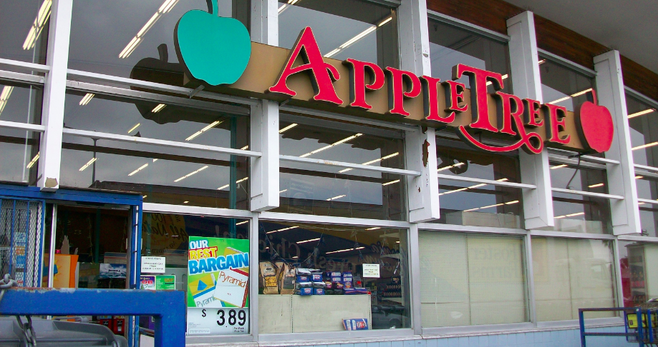 The Apple Tree market in Ocean Beach recently won a brief reprieve from their scheduled November 27 closure. The longtime grocer located at 4949 Santa Monica Avenue “will now be open until December 31, 2012,” according to an unidentified employee who spoke to me on November 28.

I asked a Foster Farms delivery-truck driver in the parking lot if the store was closing this week. “Not the way they are ordering chicken,” he said.

Word on the street is that next year the Apple Tree will scale down and move into the Ocean Beach Surf and Skate Shop location on Newport Avenue, and the skate shop will relocate once again.

Some Ocean Beach residents were disappointed to hear they were losing the only full-service grocery store in town. However, a rumor has been circulating that a Foodland Market will open in place of Apple Tree.

While the Apple Tree proprietor does own the old B of A building that houses the skate shop, I've got to assume he's got some sort of lease agreement that would preclude him from immediately booting the current tenants.

He has gone on record as cited by OB Rag and others saying part of the reason the store is in such bad disrepair and still has all of its '70s-era fixtures is because of his inability to negotiate a long-term lease, though he's said he's willing to dump $1 million into the property if he could get one...I'd be surprised if the current owner gets the boot just to move in another grocer, and disappointed if it means the continued low quality shopping that drives me out of the neighborhood to the chain stores in the Sports Arena district for any purchase bigger than I can carry on my bike.

From my source, I was told that there is a longstanding agreement between OB Skate & Surf Shop and the Apple Tree brothers. Apparently, they are all good friends and The Skate Shop has known all along that the time would inevitably come when the Apple Tree brothers would come knocking on his door for their property. Perhaps he received a very favorable rent due to this unique arrangement?

I have shopped at Foodland stores previously when I lived in the South Bay. They are not that bad and I am sure that the decrepit, aging Apple Tree would have some money poured into a facelift for it before the new proprietor takes over.