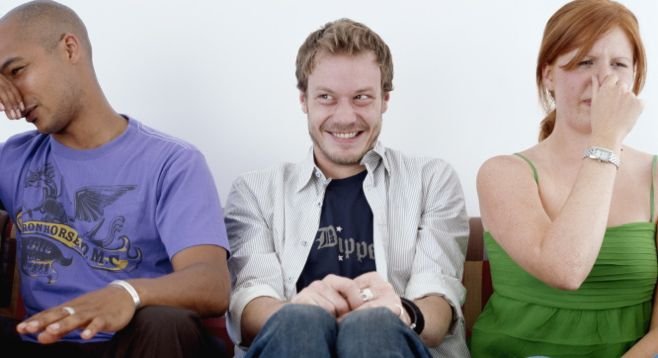 Hey Matt:
The elves will love this one! After a few hours and many beers in the garage I could not devise a system for measuring the pressure of my burps. We’re talking good, forceful, thundering beer burps here. And even the soft, after-dinner burps. What PSI ranges do we burp at?
— Freerider, Bonita

Hey Matt:
How come when I break wind the smell can be potent but not necessarily unpleasant? If someone else floats an air biscuit, it is almost always repulsive. What makes our own trouser trumpets bearable while we gag at another’s one-gun salute?
— Jeff, Tierrasanta

If you’re industrious, nothing stops you from getting a sensitive pressure gauge, hooking it up to some rubber hose, and belching into it to get a reading. Of course, this could get problematic since it would be hard to isolate the burp and not accidentally or subconsciously give it a little “push” from the lungs. Burps are, generally speaking, pretty low-pressure events since their whole modus operandi is to burble up from the stomach a few bubbles at a time. Their composition is mostly swallowed air, but beer burps get the extra kick from the beer’s carbonation being released into the stomach and esophagus. The “musical” pitch of a burp is deep, deeper than the average fart because the air moving slowly through the fleshy tube of the esophagus creates all kinds of resonant tones as it passes the larynx. It’s no slight against your inner workings that you probably can’t belch at 160 psi, so don’t take it to heart. It takes as much as half-a-gallon of air at about 15 psi of pressure to inflate the average balloon. Even the biggest burp might only have a pint of air at atmospheric pressure and if you tried to burp into a balloon it wouldn’t get you very far.

As for breaking wind, the process is different than a burp in that the average fart contains a higher percentage of gas produced by bacteria. That’s where the stinkiness comes from — sulfurous products of bacterial metabolism in the intestine. There’s no real consensus on why “you like your own brand the best,” but I have heard a few pretty great theories floating around over the years. Some people suspect it’s an instinctual response to marking territory through scent. The smell of your own farts would be almost soothing in that case, since you’d be subconsciously reassured that you were safe in your own, stinky space.

I have to give credit to the Facts on Farts for a pithy, artful explanation of whether it is common for people to enjoy the smell of their own flatus: “it’s not only common, it’s universal. A person farts and then thinks, at least subconsciously, ‘wow, I made that!’” It’s as if our impulse towards creative expression includes taking pride in a good air stamp.