Windmills of Change in Ocotillo 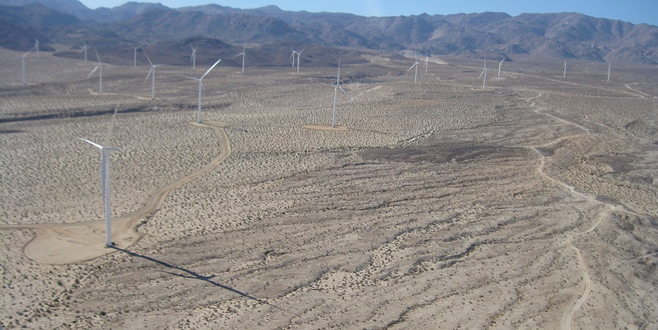 Many readers have probably driven out to SR-2 just north of Ocotillo and taken Dos Cabezas Road to its western terminus in order to hike Goat Canyon and see the wood railroad trestles and tunnels built between 1907 and 1919.

The so-called “Impossible Railroad,” a dream of John D. Spreckels, was to provide San Diego with a railroad for transporting cargo from the harbor to points east. The area used to be covered with wildflowers in spring and coyotes, roadrunners, bighorn sheep, all running free and surveilled by hawks and falcons.

This photo, taken from a private aircraft flying westbound from SR-2 at 500 feet above the ground, shows SR-2 on November 22, surrounded by 452-foot-tall towers sporting huge propellers for generating electricity. The cables running from the towers to the power station have been entrenched and roads disrupting the natural flow of flood waters off the nearby Jacumba Mountains have changed the terrain forever.

There will ultimately be 112 such towers at the base of the Jacumba Mountains where  I-8  enters the Imperial Valley just west of El Centro. 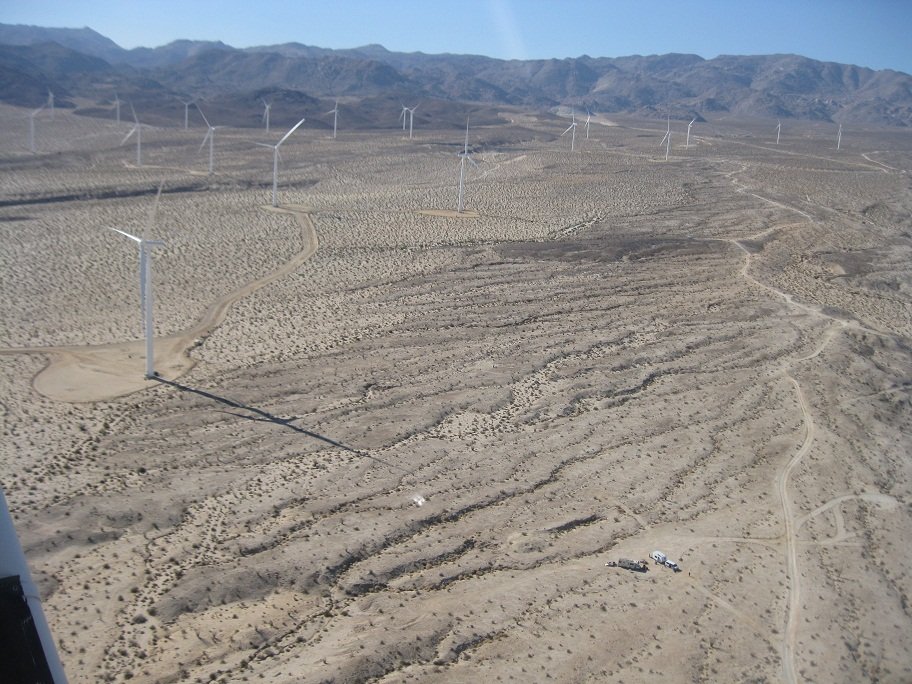 What a terrible tragedy. Unnecessary and avoidable.

Well, the winds and flash floods made that east/west railroad link impossible, maybe they will do the same with these towers.

Incidentally, the policy has always been to allow open and free camping within the Anza-Borrego State Park area (except for the requirement to have an Adventure Pass). Does anyone know if that has changed as a result of these towers? Some are clearly in the park. I'm wondering if it is forbidden to camp within "X" feet of these towers now.

According to the developer, Pattern Energy, and the BLM, camping will be permitted in and around the industrial wind turbine facility, no setback was stated. According to Pattern Energy, the area will not be fenced. But that doesn't necessarily mean that the area will not be fenced by some other agency. BTW, the turbines are not located in the Anza Borrego State Park, but are located just outside the boundary. As an existing resident, I am forced to live in the middle of these monsters. I can't imagine why anyone would enjoy camping anywhere near these eyesores.