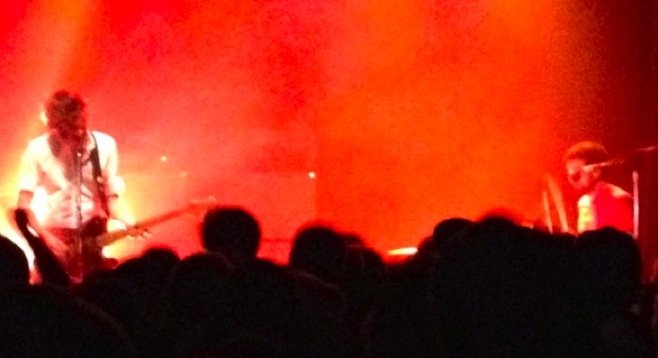 Like a juvenile Neil Young, guitarist/vocalist Brian King cast electrified chords to the night sky over UCSD’s (partially open-air) Porter’s Pub. As the last blast drifted on the wind, the ample crowd applauded. King beamed, “Just based on your reaction to my noodling, I know you guys are going to be great.”

The duo of King and drummer/vocalist David Prowse opened with “Adrenaline Nightshift,” a cut from Japandroid’s latest release, Celebration Rock. It was energetic but ragged. King confessed to some kinks and promised improved proceedings.

The Vancouver-based band seemed determined to make their second San Diego visit count. “We’re really happy you came to see us,” King admitted. “We know how many great shows are going on tonight.”

The duo’s grateful attitude and engaging garage-rock anthems struck a chord with the largely hipster audience. Japandroids infectious energy even transcended to the portion of fans outside in the beer garden. Lyrics such as “We yell like hell to the heavens” from “The Nights of Wine and Roses” were particularly apropos.

The group’s indie qualities and lack of bass were, however, hard pressed in the venue’s unique environment. The acoustics didn’t flatter the duo’s more murky tracks, such as “Wet Hair” and “Heart Sweats,” both from the lo-fi, 2009 release Post-Nothing. What nuisances there were blended into a wall of sound. Yet, nothing could dampen the Japandroids apparent affection for one another and their upbeat stage presence. Members of the audience displayed their appreciation with stage diving and some stylish crowd surfing.