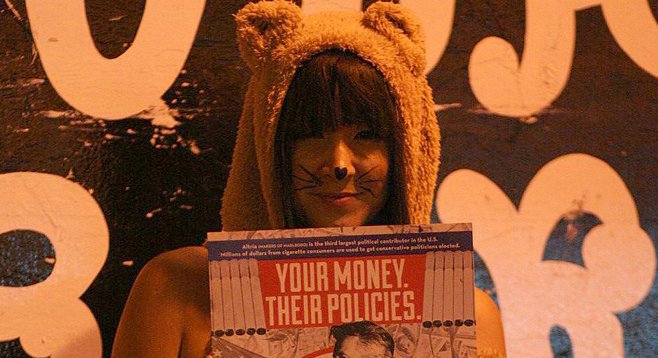 San Diego club-goers find themselves surrounded by cigarettes outside concert venues and art spaces. Smoking is a way of socializing, fitting in. Or so advertising would have us believe.

Commune Wednesdays has set out to reverse this image by holding quit groups and using art to expose the tactics of tobacco companies. This campaign was started by Rescue Social Change Group, funded through a grant from the University of California, San Francisco. Research conducted by Rescue SCG concluded that many smokers live and/or socialize in the urban core of San Diego. Jenny Kondrasky of Rescue SCG came up with the concept of Commune Wednesdays in 2008 to address this populace.

The last Wednesday of every month, musicians and artists contribute by providing entertainment and illustrating one of the “Big Tobacco Facts” listed on Commune’s website (jointhecommune.com).

Commune finds that art and music not only draw crowds, but it is an effective way to create awareness about Big Tobacco. “People are more responsive to something that is aesthetic...rather than just handing out literature and pamphlets and all that,” says Mike Turi of San Diego psych-pop band Wild Wild Wets, who helped develop Commune in 2008 and performed at this year’s Halloween Commune.

“We tried to figure out a way to help people quit but in an environment they might actually go to,” says Kondrasky. Commune’s quit groups are held at local bars to break the association of drinking and smoking. After the first few pilot groups, surveys taken by Commune indicated that their quit groups have a 25 percent success rate for those who want to “club” and quit smoking.

Celeste Byers, an artist who will participate in the next Commune Wednesday, says, “At the last Commune event, people were smoking cigarettes. It’s, like, ‘Hey, guys, you’re not supposed to be doing that here.’ At least it gets people to think about [quitting].”

Commune Wednesday at the Whistle Stop Bar in South Park on November 28 will also include indie-rock band New Mexico and DJ Clinebell Express.

Hadn't heard much about this before, not since Mike Turi first talked it up a few years ago - excellent report, Lara! I saw your earlier concert reviews - hope to see more of your stuff here in Blurt!

Thank you! :) I'd love to contribute more to Blurt in the future!