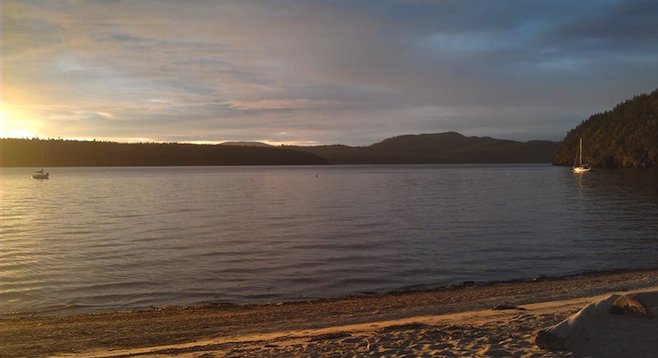 Z and I arrive by evening ferry at the nondescript dock of Lopez Island. A sign by the terminal advises that “All at large dogs will be detained” – curious, to say the least.

We post camp at the Odlin County Park a short distance down the road, right on the water.

The landscape is flatter on Lopez than the other San Juan Islands, so we peddle the four or so miles into town to catch last call at the Galley around 11 p.m.

A few locals sit around out front talking about street artists Banksy and Shepard Fairey as a boxer growls at our bike lights suspiciously.

Her owner puts her in the truck, saying, “I just got her about two weeks ago and I’m not about to coddle her and let her think it’s ok to act like this.”

I mention the “at large dogs” sign and one of the others says, “Dogs can actually be shot on sight if they get on your land here. There are so many sheep on the island that it isn’t tolerated at all.”

Conversation continues about Exit Through the Gift Shop, a documentary (or mockumentary, depending on who you ask) about the British artivist Banksy in which a knock-off artist named Mr. Brainwash gains a degree of notoriety in Los Angeles by selling works that clearly rip off styles generally associated with Banksy, San Diego artist Shepard Fairey, and Andy Warhol.

“There are plenty of conspiracies that suggest Banksy was actually working with Mr. Brainwash and the whole thing was a ploy,” one says.

“It would be awesome reality hacking,” I suggest.

“It points out the death of the American Dream,” he continues. “The American Dream says that if you have an original and relevant idea, you can go and work hard and make that idea into a business that will support you and your family to a reasonable degree. But that’s not how it works. Now, if you have an idea and you do anything about it – anything at all – pretty soon one of three things will happen.

“One, someone will say they thought of it first and sue you for everything you’ve got, or at least run you broke with lawyer fees.

“Two, a lawyer will exploit a loophole in the way you run your business and run you into the ground with a class-action lawsuit or an ADA violation or some damn thing.

“Three, a corporation with a competing product and more resources will buy you out. Best-case scenario. Sell out your dream.”

The notion is especially poignant in the microcosm of Lopez Island, where the grocery stores brim with local goods – pickled garlic, goat cheeses, chipotle-goji-cacao hot sauce, greens – that, while more expensive, take precedence over outside competition.

The Dream, at least within the Puget boundaries of the so-called “Rock,” may just have a chance, for now.

Once the Galley closes, Z and I bike over to karaoke at the Islander - an overpriced resort joint full of wasted vacationers.

The $8 cocktails don’t matter, however, because a drunk man from Burlington continuously buys us shots of Bulleit bourbon as he expounds on the enduring depths of the love he has for his wife, who is talking with her girlfriends at a nearby table while a gaggle of girls twirl and toss around a roll of toilet paper on the dance floor.

It’s sad and classic and beautiful all at once.

I sing a terrible rendition of “Suffragette City” and the jockey cuts me off right before I get to “wham bam thank you ma'am!”

A light rain falls on our tent as we dream.