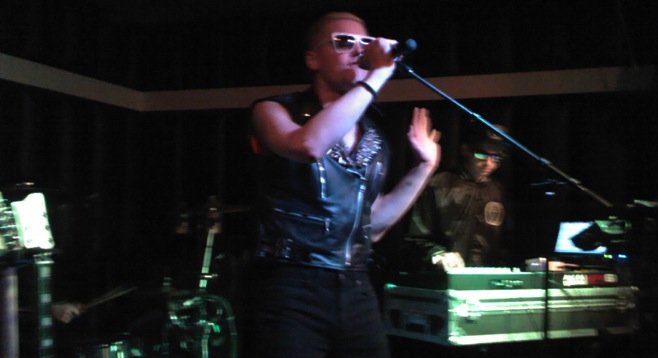 John O’Regan, who has sanctioned the stage name Diamond Rings, brought his ’80s pop show to Soda Bar. In support of his sophomore release, Free Dimensional, the Canadian had been opening for the band Stars before venturing on his current headlining tour.

Backed by a four-piece band, O’Regan is infatuated with glitz and glamour circa early David Bowie with a slice of Gary Numan on the side. Standing six feet, four, the lanky O’Regan possesses a surprising baritone that intensifies the glam-rock songs he belts out. O’Regan’s bright eye shadow surrounded piercing blue eyes, and his black leather vest was bedazzled with glitter and spikes. There seems to be a plan embedded in O’Regan’s stage show: to make attendees remember not only what they hear but also what he was wearing.

Starting the show with the pop song “Day & Night” followed by the guitar-heavy track “Runaway Love,” O’Regan was in high spirits as he danced flamboyantly upon the speakers and among the crowd. Other than the unattractive rap verses in a couple of songs, Diamond Rings’ music is engaging and his performance entertaining.