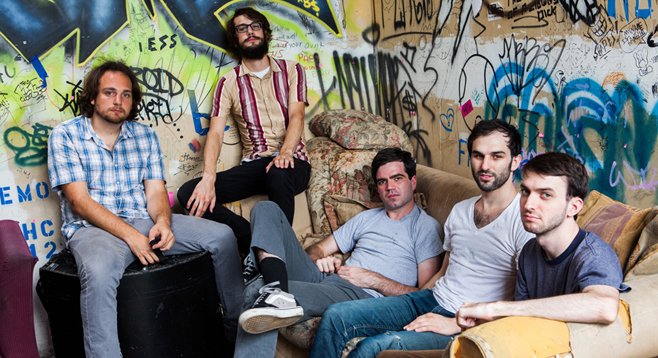 Punk is getting interesting again. This year, the Russian provocateurs in Pussy Riot proved that punk is still a polarizing political and cultural force. But, musically, punk is thrilling in a way it hasn’t been since Billie Joe Armstrong was in kindergarten.

New Jersey’s Titus Andronicus has been a leader in this sense. Its 2010 The Monitor was a loose (in more ways than one) concept album inspired by the Civil War and full of references to great songwriters such as Billy Bragg and Bruce Springsteen.

If that doesn’t sound like punk rock, well, that’s part of the reason why punk is interesting again: it doesn’t always sound like “punk rock” anymore. Titus Andronicus doesn’t limit itself to the musical style that’s been marketed to us as “punk rock” for the past 20 years. And yet, singer-songwriter Patrick Stickles’s ragged howl of a voice can only be punk. And in case you’re still not sure, listen to the guitar riff in the new “Titus Andronicus vs. the Absurd Universe (3rd Round KO).”

That said, Stickles’s voice sounds a little less ragged and the band sounds a little less revolutionary on the new Local Business. The record has some great songs with memorably offbeat titles like “Upon Viewing Oregon’s Landscape with the Flood of Detritus,” but it’s not a grand statement the way The Monitor was.

This feels disappointing, in a way. But no one wants Titus Andronicus to keep making more and more ambitious concept albums until they sound like Pink Floyd. No, punk is interesting again because it has shown it still has the capacity to surprise and inspire us. Want another punk concept album? Go out and make your own.