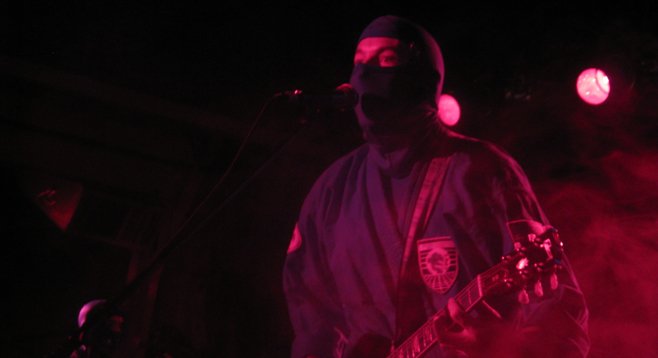 “One of our songs, ‘Gentle Sea Beast,’ is being used in a South American Axe body-spray commercial,” says keyboardist Matt Liebowitz, one half of karate-rock duo Ninja Love. Currently airing in Argentina (“The YouTube clip has been viewed almost 36,000 times”), the 30-second ad features an amorous couple incorporating food into an increasingly bizarre makeout binge, including mustard and lobsters(?!), ending with the male retreating to the bathroom to deodorize with some Axe.

“I got a phone call from Amsterdam, totally out of the blue, from a rep at an international licensing company, Massive Talent. He came across our BandCamp page and liked our songs.... It seemed a little unbelievable at the time. They said Axe was looking for a fast-paced rock song, but, honestly, it just seemed too random to be true, you know? We were excited, but it didn’t make sense.”

Ninja Love, featuring Liebowitz and singer/guitarist Mike Villemaire, performs in ninja costumes and masks, using martial arts stage props such as nunchucks and samurai swords. “This is our first paid licensing deal. I can’t say what it paid, but it was a surprising amount. The thing is, we never contacted anybody about our music, and we have no interest in the business and marketing side of things. We like writing songs and playing shows, but we never put any effort into selling ourselves. We would’ve been happy if they gave us a hundred dollars.”

Axe will also broadcast the ad in Chile, Paraguay, Uruguay, Peru, Bolivia, Ecuador, Colombia, Venezuela, Nicaragua, Honduras, Panama, Guatemala, El Salvador, Costa Rica, and Mexico, though apparently not in the U.S. “Maybe it’s a little too racy for American commercials? I think we get some royalties when the commercial starts airing in other South American countries. I should check the contract, I guess....

“Neither of us uses Axe body spray, but I think I’m supposed to tell you that I love it.”

The band’s newest release is a live EP recorded at the Belly Up in July, and they’re laying down new tracks soon for a full-length called The Goonch. “It’s about a man-eating catfish that’s developed a taste for human flesh, after feeding on funeral pyres in rivers in India.

“It’s not quite a concept album,” says Liebowitz, “but we figured that’s as good a place as any to start.”

Ninja Love appears at the Ruby Room on January 13.

Ninja Love appears at the Ruby Room on January 13 - a show well worth checking out!