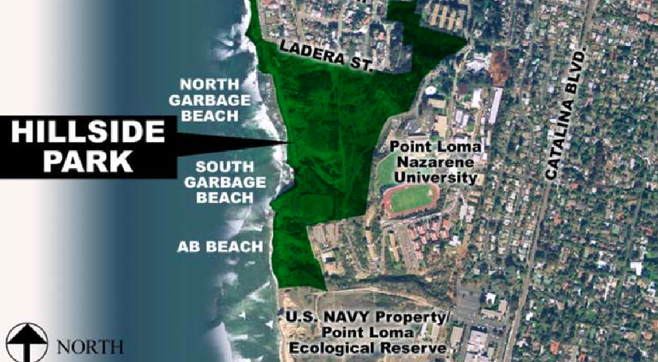 Over the Memorial Day weekend, park visitors to the hillside section of Sunset Cliffs Natural Park found one of trails closed, with yellow caution tape and signs that indicated a sewage leak had occurred.

The trail is located below the Loop Road and above the Multi-Use Trail ("sludge line trail"), east of "the Badlands."

The cordoned-off area measures approximately 60 feet by 40 feet. The footpath was covered with damp and malodorous foreign matter. The origin of the leak was not apparent to the casual observer.

On Tuesday, May 30, workers were seen raking up the debris from the footpath. One worker stated that the break was in an old clay pipe that is part of the Point Loma Nazarene University infrastructure. They said that the clay pipe had failed in the past and perhaps needed to be replaced.

As of May 30, neither the city's Park and Rec. Department nor the Park Council was aware of the spill.