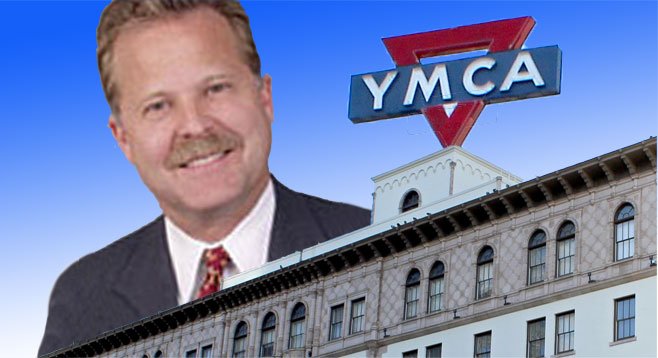 One very busy city hall lobbyist is Richard Ledford, the former aide to GOP ex-mayor Susan Golding. According to his most recent disclosure filing, covering the first three months of this year, Ledford got $8000 for working on behalf of Alliant Real Estate Investments, Inc., regarding the “development of a project at 500 West Broadway.” That’s the address of the former Armed Services YMCA building, a city historic site designed by master architect Lincoln Rogers that is now being used as a hotel. The ornate structure carries many memories for aging Navy and Marine warriors, who have opposed making dramatic changes to the venerable facility. Ledford lobbied city development aide Jeff Graham to “Obtain necessary permits for redevelopment of the site.”

Ledford’s firm picked up $4000 from General Dynamics NASSCO, the big shipbuilder on the bay, to “facilitate the establishment of a bicycle path adjacent to the facility.” The goal: “completion of a bicycle path with minimal impact to the business facility.” On that assignment, they consulted with Travis Knowles, a staffer with District Eight city councilman David Alvarez.

A great deal of Ledford’s revenue this winter came as the result of “Contingency fees earned for lobbying performed in a previous reporting period,” the disclosure says. In that category was $8000 from La Jolla Crossroads II, LLC; $12,000 from Palm Properties, LP; $11,000 from St. Paul’s Senior Homes and Services; and $8000 from High Flying Foods, Inc. High Flying, which specializes in running trendy bistros at airports, won a big contract last fall with the San Diego County Regional Airport Authority, due in part to Ledford’s lobbying.

Notice how the big money is aligned with the promoters of fluoridation. The companies which sell their toxic waste fluoride to communities can buy the best politicaians. It's time to retire fluoridation because it doesn't work, wastes money and is harmful to health. Topical application may help, but drinking it to prevent tooth decay is as foolish as drinking sunscreen to prevent sunburn. People should not be forced to consume a drug against their will.

You will see a petition at this site signed by over 4000 professionals, including hundreds of dentists, hundreds of doctors, and other medical researchers calling on governments everywhere to stop fluoridation. There are many large scientific studies referenced there to show that drinking fluoridated water has no positive effect on cavity reduction and to show that it causes cancer, thyroid damage, broken hips from brittle bones, lowered IQ, kidney disease and other health problems.

Oh please! Will this paranoia over flouridation never cease? Here's a short article on San Diego's history with the issue: http://www.sandiegoyesterday.com/?p=502

Fluoridation is a Waste of Tax Money

As a Civil Engineer, I know that people drink only 1/2% (one-half percent) of the water they use. The remaining 99 ½ % of the water with this toxic industrial waste fluoride chemical (Hexafluorosilicic acid) is dumped directly into the environment through the sewer system.

For example, for every $1000 of fluoride chemical added to water, $995 would be directly wasted down the drain in toilets, showers, dishwashers, etc., $5 would be consumed in water by the people, and less than $0.50 (fifty cents) would be consumed by children, the target group for this outdated practice.

That would be comparable to buying one gallon of milk, using six-and-one-half drops of it, and pouring the rest of the gallon in the sink.

The company CEO would be arrested immediately if they dumped their toxic waste fluoride into a river. The only way they can do legally is to run it through the community drinking water system first. It is an absolutely insane condition.

Fluoridation surely is in contention as the most wasteful and most polluting government program. Giving away fluoride tablets free to anyone who wants them or adding it to salt would be far cheaper and certainly more ethical, because then we would have the freedom to choose.