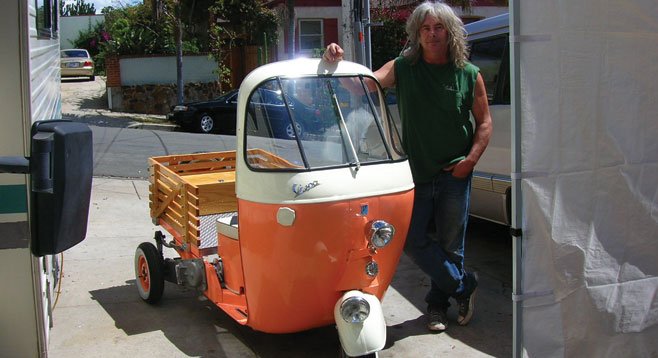 A saloon-type upright piano is the first thing a visitor sees. “That’s Country Dick’s old piano,” says Paul Kamanski. He coaxes a few notes out of it.

In his living room–turned recording studio, Kamanski plugs a Mac PowerBook into a 1960s-era McIntosh amplifier (“A Mac and a Mac,” he says) and fiddles with the laptop. The new music he’s been recording begins to play, and it is pure Comanche Moon goodness: the Heartbreakers meets the Black Crowes.

Comanche Moon is an underrated local band and ongoing side project for Kamanski, best known perhaps for writing hits for the Beat Farmers, a San Diego cow-punk band of national stature. The shoulder-length hair has turned gray, but Kamanski, 56, still makes music.

He also restores vintage motorcycles at the Mission Hills duplex he shares with his wife Caren, their teenage daughter Tennessee, a pair of housecats, and a mountain of music equipment.

“I believe it’s the Texas moon, the big harvest moon. And the Indians would use that in their nightly raids. They had to see what they were gonna go after,” he laughs.

YOU SURROUND YOURSELF WITH ARTIFACTS OF NATIVE AMERICAN CULTURE. WHAT’S THE SIGNIFICANCE?

“Anytime we’ve ever done anything for those people, we’ve ended up hurting them. They had a true government, a true spirituality, and the more I read about them, the more I think about the knowledge they had from thousands of years of walking all over this [country] that has been lost. Now we have them living on reservations with huge casinos, and they’re making money — if we could, we’d figure out a way to take away their frigging casinos.”

“As a songwriter. When I was young, I always thought that if I could just write a song that would get on the radio, all the good stuff would just happen.”

“A lot of good stuff happened, and a lot of bad stuff, too, which is really interesting about the whole trip. But it really started out with the dream of if I could write some lyrics, and if I pay attention to detail and I’m not afraid, if I write and I get over the fear of saying exactly what I feel and take the criticism. I started writing songs, and the next thing I knew I had one called ‘Bigger Stones’ that the Beat Farmers picked up.”

WAS THAT HOW THAT RELATIONSHIP STARTED?

“Yes. Country Dick [Montana] used to come over, and he’d go, ‘Well, what else you got?’ I started writing for him, and I had my own band and I had a band with Joey [Harris] called the Electric Sons, and I was in a band before that called the Fingers with Joey and Billy Thompson. We started writing all our own songs.”

ORIGINAL-MUSIC BANDS HAD A TOUGH GO OF IT. WHAT MADE YOU TAKE THAT ROUTE INSTEAD OF THE COVER-BAND CIRCUIT?

“I noticed that the vocals in pop music kept getting higher and higher. But my voice wasn’t getting any higher. When I got up to around the mid-area of the guitar, the keys of G and A, that was my top end. To be singing up there in the Eagle and Journey world was just...music was just getting worse every decade. I said to myself, I gotta start writing more. It became interesting. Joey and I had a falling out. I moved to San Francisco, and that’s where I really said, Can I write music for a living?”

“I wrote 35 songs in a year. I got up every day and told myself that whether I come out with something good or bad, at least I’m gonna get up and do it. This was the late ’80s, early ’90s.”

WHAT WAS WRITING SONGS AND WORKING WITH COUNTRY DICK LIKE?

“He would come over in his Falcon with a case of beer in his front seat and say, ‘Get in the car.’ And I’d ask, ‘What are we doing?’ And we’d drive to the Belly Up and we’d drink that beer and we’d party at the Belly Up and we’d come back here after the bar closed. And then we’d drink more. And we’d go through my tape archives. I recorded every single idea I could put my hands on. I wrote them down, and I made stacks and stacks of tapes organized into what I called the A drawer, the B drawer, and the C drawer.”

LET’S COUNT THE BEAT FARMER HITS THAT CAME OUT OF THE ‘A’ DRAWER...

“‘Bigger Stones,’ ‘Hollywood Hills,’ ‘Blue Chevrolet,’ ‘Road to Ruin’...about 11 songs. And then the Country Dick stuff: ‘California Kid,’ and the ‘Indigo Rider’ song that was on his The Devil Lied to Me. In the end, Dick was trying to give himself some credibility. He didn’t want to be the coyote-crazy guy who was always diving off the stage. He wanted to sing a country ballad that made you cry.”

DID YOU EVER STRIKE IT RICH?

“I made a little bit. There were royalties for a while. When you get your first check for 700 dollars you go, ‘What? For writing music? Are you serious?’ Then one day you get a bigger check and you go, ‘Oh, my, I could actually make some money.’ But you watch it go up and down. The weirdest thing about the business is that when you go into it, you’re hyper and scared to death and excited about getting signed but what you don’t know is how you’re gonna get screwed. You know you’re gonna get screwed, you just don’t know how.” ■

Right on! It's about time somebody spent a little ink on my friend Paul Kamanski. Thank you Reader & Keep up the great work J.A.S.

While I think the world of Jay Allan Sanford I see now I was mistaken in thinking he'd written this lovely piece of local music journalism. Nay 'twas our other brother, multitalented photg/journalist Dave Good. What's in a name?

This week's example of an unintended oxymoron: Beat Farmer Hits.