We Have a Pope: A “What If” Meditation on the Passing of the Papal Torch 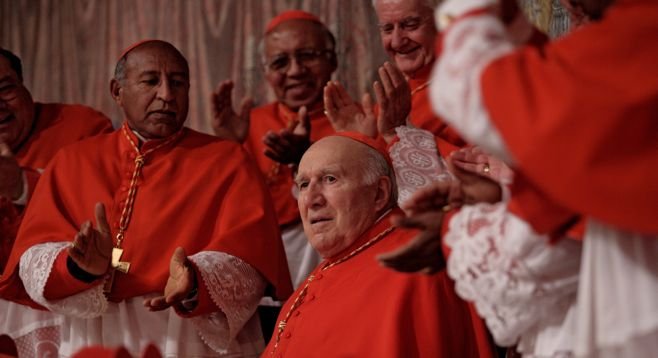 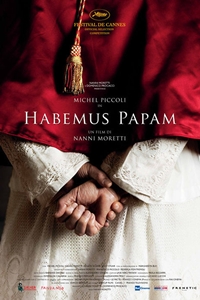 Director and co-writer Nanni Moretti presents us with a “what if” meditation on the passing of the papal torch. Following the death of the old Pope, the conclave of Cardinals elects Father Melville (played with timid sincerity by Michel Piccoli) to the post. We are given a well-realized view of the proceedings: the electoral process, the eager public, the media attention, the debate over the color of the smoke rising from the conclave chimney.

These opening ceremonies are rather heavy handed. As a psychologist states upon analyzing the new pope when the latter finds himself unable to emotionally face the responsibility of his new station: “It’s a little too much.” This is one of the finest scenes in the film — an absurd therapy session, the man of science questioning the man of faith, surrounded by Cardinals. The psychologist (an atheist to boot) is given strict instructions: no questions about childhood, desire, or dreams.

Another standout includes a sequence where we bid goodnight to the Cardinals in their individual quarters, each occupied in a separate banality to pass the evening hours. Some moments achieve an absurd fascination, such as a round-robin volleyball tournament for the conclave. The sight of dozens of seniors jumping to spike the net would be odd enough, even without the holy garb.

These sights are punctuated by everyday banalities that become gems of wit in the ritualistic context: a Cardinal tumbling to the ground in the dark, a reporter interrupting a chant to request an interview as if he were covering the red carpet at the Oscars. These details are the film’s greatest asset. The texture of the costumes, the richness of the sets, the devotion to good acting — all contribute to a sense of realism.

At the heart of the story is the reluctant new Pope: “God sees abilities in me I don’t have.” Even more telling is his statement to a second psychoanalyst when she questions him about his profession: “I’m an actor.” The film delves into the pressures of belief in the immortal on the sensibilities of mortal man.

The acting is uniformly strong, especially in the credibility of those playing the Cardinals. Even while participating in secular activities, they preserve a decorum as devout men. There are no spotlight hoarders in the cast, but rather an impressive commitment to the ensemble nature of the film. The power of the acting comes from its communal dynamic.

The camera, while wide in scope, capturing the grandiosity of the Vatican chambers, never escapes a sense of voyeurism. The tenacity of the subjects, clergy and parishioners alike, always makes us feel as if we’re spying. Outside the Vatican walls, the camera is more pedestrian, and also more sluggish. Unfortunately, this is the majority of the time we spend with our main subject: the new Pope. We are left feeling sympathetic to his trials and a bit bored by their length.

Piccoli must be a hundred years old by now. I remember him from a few films in the 50s, 60s and 70s.