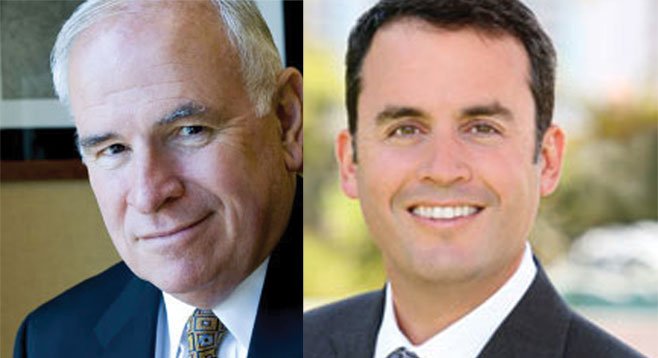 California Strategies & Advocacy, the Sacramento-based lobbying firm founded and run by Bob White, former top aide to ex–San Diego mayor and onetime GOP governor Pete Wilson, had a busy time of it in San Diego during the first three months of 2012. The company got $3000 from real estate management group San Diego Building Owners and Managers Association to have California Strategist staffer Craig Benedetto lobby District Six city councilwoman Lorie Zapf and her chief of staff Job Nelson against “increase to linkage fees and infrastructure bond.” It picked up the same amount for the same cause from NAIOP of San Diego, a commercial real estate developers association.

As we’ve previously reported, Capital Power, which has embarked on a plant-building binge across the U.S. Southwest, has already received the green light from the California Fair Political Practices Commission to finance a San Diego initiative campaign seeking voter approval of a facility here. There is a state law against foreign companies funding political campaigns in California, but the Canadians say they will create a loophole by running the campaign cash through their United States subsidiary. “An employee of US Operations who is a United States citizen will determine the amount of contributions to be made by US Investments to the committee and will be vested with sole authority to administer the committee, making and authorizing all committee expenditures,” wrote commission general counsel Zackery P. Morazzini in his March 5 letter approving Capital Power’s laundering scheme.

Haddad and Benedetto were employed by a possible consumer of some of that new electricity in the form of another of their many clients, Clear Channel Outdoor. The lobbyists collected $3000 from the billboard giant to push for “amending the City of San Diego’s sign ordinance for the purpose of converting signs to a digital format.” Times Square–style JumboTron animated signboards have become the new normal for the billboard industry. On that assignment, the highly paid lobbying duo visited Graham of the mayor’s office and Katie Hansen, a staffer with District Two councilman Kevin Faulconer.

On another front, the lobbyists picked up $10,000 from Rural/Metro San Diego, an Arizona concern that is still battling to “enhance the reputation of the company & maintain the current contract with the City of San Diego to provide ambulance services.” That assignment may prove to be California Strategies’ most dicey of the season, in light of a negative review of Rural/Metro’s performance by city auditors last year. Still, Haddad and Benedetto appear to have given it their all, appealing to councilmembers Zapf, Faulconer, Marti Emerald, Tony Young, Sherri Lightner, and Todd Gloria, along with their staff. Mayoral aides Goldstone and Julie Dubick, as well as Aimee Faucett, were also wooed.

Apparently not leaving anything to chance, on January 30 Haddad gave $250 to Lightner’s reelection bid, and Benedetto gave the same to Gloria’s campaign on March 29. That same day he and Haddad threw a fundraiser for the Third District incumbent that netted $1650. Oddly enough, Gloria is running unopposed; presumably he will find something else to do with the cash.