Board Swap in Cardiff 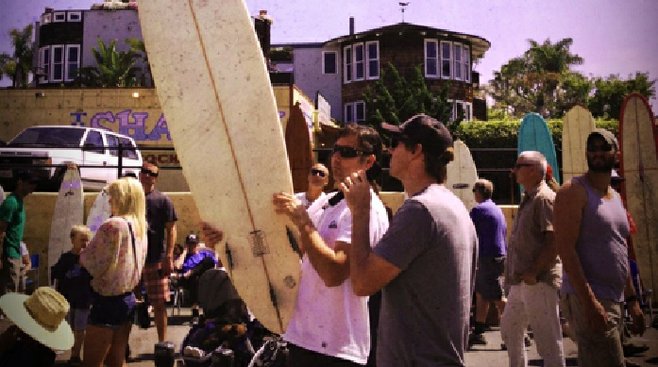 Auctioneer and store manager Roy Coffman said, “People are sick of Craigslist because sellers...flake out or rip people off.”

Boards were being sold in the parking lot, but it had the feeling of an aquaphile’s farmers’ market. I let myself in on a conversation with Steve Ford, a surfer who’d been in the industry for more then 20 years. He was excited to see a board going on the auction block with a logo he’d designed for Third World Exotic (Larry Mabile) about a decade earlier.

“I can’t believe they’re still using that!” he said with a seasoned surfer’s nonchalant pride. Ford went on to lament that the surf industry was depressed like most other recreational activities in Southern California. He mentioned that his earnings last year were more than $40,000 less than his days working for Rusty.

Besides surfers looking to thin their quiver for cash, independent shapers showed up to sell their boards. Many boards had a story, and even cheap ones found new homes.

Patagonia also hosts a “board drop box” in its back foyer, where boards are donated for RERIP.org, a 501c 3 that restores the boards and sells the ones that are still usable. RERIP’s motto is “reduce, reuse, reride": reduce the waste from the surfboard industry and reuse boards, fins, and other material. Besides being sold, some rehabbed boards are given to children. Funds from boards sold are used to partner with other coastland conservancy groups.

Even old wetsuits are being used in creative ways. The neoprene is used to make the handle for bodysurf body handplanes, many of which are shaped from vestiges of surfboards.

Before I left, Coffman also gave me a beer koozie made from the arm of an old wetsuit. Cheers.