Noel Gallagher Gives the People What They Want 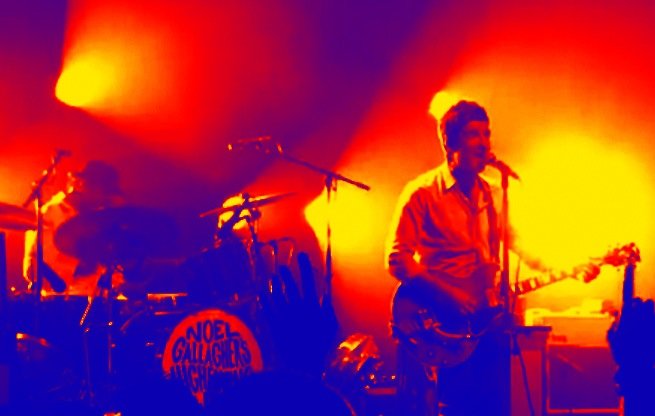 Unshackled by the name “Oasis” and the tacky label “Britpop,” Gallagher senior hits the road to promote his first solo outing.

At a surprisingly less than full house, Gallagher opens with a lithe, acoustic-y version of old B-side “It’s Good (to Be Free).” The title suggests a statement of intent, but the song sounds vacuous.

His debut album features some fine songs (“Record Machine‚” “Soldier Boys‚” “Everybody’s on the Run”), and they all sounded epic. Unfortunately, the set falters, as it never gets a chance to gain any kind of momentum; as soon as the rock starts to take off, it’s pulled back down by a banal ballad.

Noel is very funny and charming, but he’s not a front man. Whereas little brother Liam could capture a crowd, Noel fronting a band of session player’s had the stage presence of a vase.

Gallagher gave the people what they came for — lots of Oasis songs. He includes ten of them in the set (and why shouldn’t he?). Some work, but a stripped down version of “Supersonic” sounded anything but. He treated us to a new song in “Freaky Teeth‚” a damn good, organ-driven ’60s-style number.

“It was a fucking pleasure to play for you lot tonight‚” Noel stated, before closing with the predictable, crowd sing-along “Don’t Look Back in Anger.”

This reviewer must have been to another show that he mixed up with Noel Gallagher's. The Spreckles Theater was to capacity. The box office lady told me so. The music was excellent and the crowd seemed to eat it up. Noel Gallagher has plenty of personality, considering he is a cold-blooded Englishman. The High Flying Birds received a thunderous ovation and they seemed genuinely pleased that San Diegans showed them so much love. The band promised in closing that they would be back again. So much for this gig "lacking momentum."

From Noel Gallaggher's tour diary; - " Where were we? San Diego? Strange place. Nice place. Very hot. Not much else to say about it really. It was an in and out job. The gig was a bit . . . a bit . . . a bit . . . I'm searching for a word here and I can't find it . . . a bit meh? That's what you young people say innit? Not earth shattering. Not shit. Just dull. Now that could be due to the crowd seemingly being a visibly older crowd than what we're being used to dunno . . . any way I've said too much we should move on." I agree Noel has plenty of personality, but not 'a cold blooded Englishman', I think you must have been to another show, the show was at the Balboa theatre, not Spreckles.There was plenty of empty seats in the upper tier btw.