The Five-Year Engagement, a Spinning but Aimless Turnstile of Gags 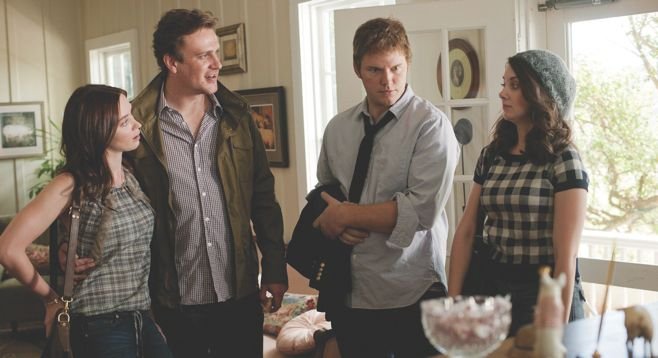 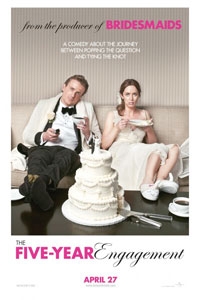 Emily Blunt is so sanely appealing that her honest touches rescue parts of The Five-Year Engagement, but not the movie. What could? Director Nicholas Stoller wrote it with actor Jason Segel, who gave himself a showcase as Tom, engaged to Violet (Blunt). They meet cute in San Francisco (poorly shot, which is an achievement), then fail to get married after moving to Michigan for Violet’s academic career.

Resentful Tom, formerly a rising chef, works in a mediocre shop, grows a beard, drinks, learns to kill deer, and makes dull meals of venison. The one clear reason the couple are not yet married is never spoken: they lack real chemistry together. Blunt has sure, unforced charisma. But Segel is like a sitcom variation of Brendan Fraser and is given too many close-ups (also butt shots).

In this chick flick full of chatty tangents, comedy often seems targeted to a young male demographic. Is that for a unisex balance of crass laughs? When a pretty blonde suddenly spews crude abuse at Tom, it feels unfair to her, him, and us. These dumb comedies are running out of ways to shock us, and they lack the screwball wit to cover their silly, gaping contrivances.