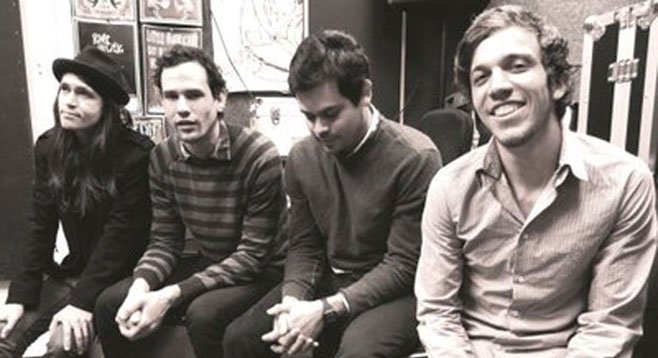 On March 30, Hills Like Elephants will play a release party at the Soda Bar for their debut full-length Endless Charade (Requiemme Records/BMG Chrysalis). “It’s a heart-on-sleeve concept album about girl troubles that plays like a Motown album with drum machines,” says bandleader Sean Davenport of the CD, which was produced by Christopher Hoffe at Chaos Recorders in Escondido.

Jason Mraz debuts a new hairy grunge look on April 17 with his full-length Love Is a Four Letter Word. A video for the first single, “The Freedom Song,” is already streaming on YouTube, and the song can be previewed on iTunes. According to Mraz, “This is the first cover I’ve ever put on one of my studio albums. Written by a kindred spirit in a time of healing, Luc Reynaud put some joy in this thing.”

Fresh off a Japanese tour, Flogging Molly is dropping a red vinyl seven-inch on Record Store Day (April 21), featuring an unreleased version of “Drunken Lullabies,” mixed by engineer Steve Albini, and an unreleased acoustic version of “A Prayer for Me in Silence,” limited to 2000 copies (SideOneDummy Records).

Greg Laswell’s fourth full-length, Landline, will be released April 24, featuring guest appearances by Ingrid Michaelson, Sia, Sara Bareilles, and more. Self-produced by Laswell, the tracks were recorded at a church-turned-house in a small lobster town in rural Maine. “I started in L.A. and New York,” says Laswell, “before settling into this house in Maine that my wife’s parents own. It was so remote, there was no cell-phone reception, hence the album title Landline.”

Retro rocker Jon Goodhue is recording an EP with P.O.D. bassist Traa Daniels, who will perform on tracks as well. “We finished preproduction with L.A.-based drummer Nick Adams [Life Down Here],” says Goodhue. “Other than my guitars, most of the [remaining] time will be going into vocal work, since it will be highlighted the most on this release.”