Mountaintop views, waterfowl, an extinct volcano, plus restoration in action. 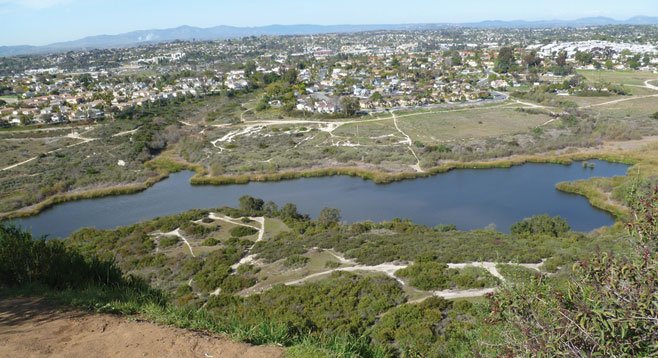 There are many ways to enter the preserve, but most lack adequate parking and currently none offer toilet facilities, except the Oak Riparian Park in Oceanside, which offers both as well as a chance to appreciate the beautiful old live oaks for which the park is named. The hike described here uses well-traveled, mostly marked trails, though it can be a challenge not to veer off on one of the many informal, heavily used trails. Do not worry about getting lost. That would be almost impossible, as your goals are usually within sight.

From the Oak Riparian Park lot, walk to the southwest and take the concrete path leading west and then south toward the oak-lined stream where the concrete ends and a well-used dirt trail begins. Cross the stream and proceed west, following the trail on the south side of the stream, passing under huge live oak trees. In 0.12 mile, pick up the Lake Calavera Preserve trail (marked). Continue walking west through the riparian ecosystem with more live oaks, mule fat, toyon, willows, lemonade berry, and gooseberry. For the first half mile, the trail follows and crosses the stream several times before leaving the stream and entering an open grassland of mainly nonnative grasses. At this point, Mt. Calavera (or Cerro de la Calavera...also known as Skull Hill), rises to a height of 513 feet. 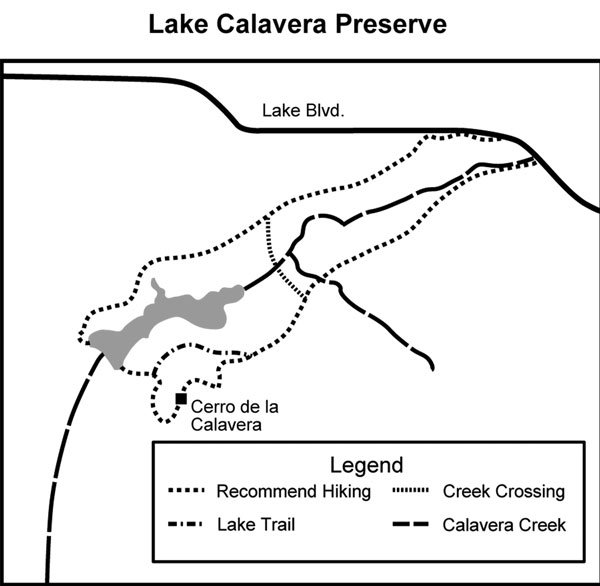 In another 0.6 mile there is a well-marked fork in the trail. Choose the trail marked “Peak,” passing through a coastal sage scrub community with a preponderance of black sage and buckwheat and then into a mixed chaparral community of mission manzanita, yucca, lemonade berry, bush monkey flower (red, yellow, and orange), as well as deer weed and chamise. At 1.2 miles into the hike, you will find yourself on the nearly flat top of Cerro de la Calavera. This is all that remains of a volcano that occupied this site 22 million years ago. It is what is known as a plug, composed of fine-grained basalt that clogged the volcano’s throat. After the volcano erupted for the last time, its cone slowly eroded away, leaving only the plug. In recent times, people helped this process along as the plug was mined to produce gravel for close to 25 years.

On a clear winter’s day, you will be able to see the ocean to the west and spot San Clemente and Catalina Islands. Look northeast to see the snowcapped San Gorgonio and San Jacinto mountains, east to Palomar Mountain, and southeast to Double Peak and San Diego’s Mt Whitney. Find the trail on the southwest side and keep to the right as you descend to a nearly flat trail leading north then east around the mountain. When you reach the northwest side of the hill, follow a trail down to the dam that impounds Calavera Creek, creating the lake. Cross the dam and take the trail leading to the right just beyond the end of the dam. This trail will take you back to the Oak Riparian Park parking lot as it proceeds through several areas undergoing habitat restoration. Large posters provide information on some of the work being done to restore the habitat. After 2.75 miles into the hike there is a junction with Creek Crossing Trail. The southern choice intersects the trail coming out from Oak Riparian Park. The eastern choice leads to Lake Street and back to the park.

Distance from downtown San Diego: 41 miles. It is a 45-minute drive to the trailhead. Go north on I-5 to Hwy 78, then east to the College exit. Go south 0.4 mile on College to Lake Blvd. and turn left. Drive east 1.5 miles to Ridge Road and the sign for the Oak Riparian Park. Turn right into the parking lot. Picnic tables and toilet facilities available.

Difficulty: Easy, except for a short scramble to the top of Mt. Calavera. The area is open to all types of nonmotorized activities, including walking, running, and mountain-biking.