Ambling in the Everglades

Get with the gators in Everglades National Park. 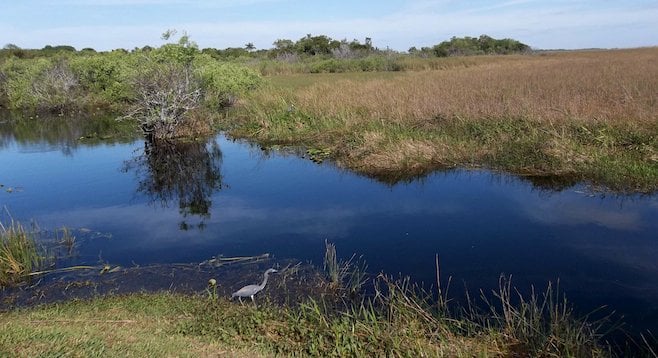 At 1.5 million acres, Everglades National Park is the third-largest national park in the U.S. It is, nevertheless, half the size it was a century ago. Once you’re away from the visitors and crowds, the experience of encountering this primordial region can be a transcendent one.

If you’re visiting the Everglades on a day trip, it’s a good plan to take at least one walk to view the wildlife and one trip on the water. A stop at the Royal Palm Visitor’s Center just within the park entrance is recommended to get your bearings, make preparations and pick up free maps.

Walking through the Everglades offers you the opportunity to experience one of the world’s unique ecosystems. The best hiking opportunity to view wildlife in the Everglades is along the Anhinga Trail, a short drive from the Royal Palm Visitor’s Center. The Anhinga Trail is just a half-mile walk along a man-made canal, but it’s loaded with wildlife.

The numerous gators here are impressive, but what really captured my attention were the birds. I’ve never been much of a birdwatcher, but I was struck by the beauty and variety of the birds in the Everglades.

I encountered the mating stance of the anhinga with its outstretched wings, the vibrant colors of the double-crested cormorant, the grace of the blue heron, the beauty of the egrets, the audacity of the vultures. These will all remain in my memory. Unfortunately, 90% of wading birds in the Everglades have been lost, mainly due to plume hunters. Some of these, however, such as the wood stork, are making a comeback. While walking along the trail, we watched in silence and wonder as a mother anhinga fed her babies in a nest overhanging the water.

Glaco Puig-Santana, the young guide who accompanied us along the Anhinga Trail, rightly alluded to the spiritual connection that experiencing the region can convey. “People value only what they understand and conserve only what they value,” he pointed out.

A fifteen-minute walk along Anhinga will almost certainly reveal several gators. I learned that alligators only eat once or twice a week and can survive for long periods on their body fat. Glaco compared them to submarines with periscopes. Occasionally, ominous hissing sounds could be heard from behind the bushes along the Anhinga Trail. Don’t venture close if you hear these – they are gator warnings, to be taken seriously.

The Gumbo Limbo Trail, adjacent to the Anhinga Trail, is named after the tree with red bark, sometimes called the “tourist tree” because it looks like it has a sunburn. This trail brings you into a jungle; there are signs along the trail of damage caused by fires and hurricanes. The shady trail is particularly recommended on a hot day. Although there’s not as much wildlife to see along the Gumbo Limbo Trail, there’s more of an opportunity to experience solitude than Anhinga, where tour groups tend to frequent.

There are several other trails worth exploring. The Shark Valley Trail provides a two-hour tram ride with a stop at an observation tower for a magnificent overview of the Everglades. The Mahogany Hammock and Snake Bight Trail (not as ominous as its name suggests; a bight is a bay within a larger bay) are additional hikes through forested areas.

At the Flamingo Visitors Center, you can reserve a canoe for yourself or reserve in advance for a free guided canoe tour with a ranger. You can also take a boat tour into the Everglades backcountry through cypress and mangrove forests. These leave daily from the Flamingo Marina. Manatees swimming near the marina can often be easily spotted.

Despite the fact that they are an invasive species, there are now approximately 100,000 Burmese pythons in the Everglades. They are threatening the ecosystem by preying on several other species. I did not see one, but was told that a 16-foot python had been recently caught with a white-tailed deer in its belly.

Efforts are being made to track the pythons to learn more about their habits so that they can be more easily integrated into the ecosystem. There are also 12 panthers within the park, and conservation efforts are underway to protect them.

The Everglades has a rich biodiversity – it’s much more than just a swamp, as grasslands abound. Driving through the Everglades, you encounter long stretches of prairie and a variety of interesting tree formations, including the Dwarf Cypress Forest (elevation four feet).

Watching the big sky, puffy clouds and sea of grass, I encountered a rapturous silence similar to what I experienced when I visited Yellowstone.

Unchecked development around the eastern fringes of the Everglades threatens its pristine wilderness. There are also environmental threats from hurricanes, fires and climate change. The Everglades are particularly vulnerable to any rise in sea level. Rapid sea level could submerge mangrove trees and shallow grasslands.

You can experience this national park for yourself on a day trip from Miami. For a multi-day visit, you might choose to stay at the nearby Everglades International Hostel. The best time to visit is during winter or spring as the area becomes quite hot, humid and uncomfortable for hiking in the summer.

Be sure to stop at Robert Is Here on the way back to Highway 1 for a smoothie or key lime milkshake.

Great piece Derek! I have been to the Everglades several times when I lived in Florida. Thanks for bringing me back!

Thanks, Matt. It's a great place and I'd love to return there someday.