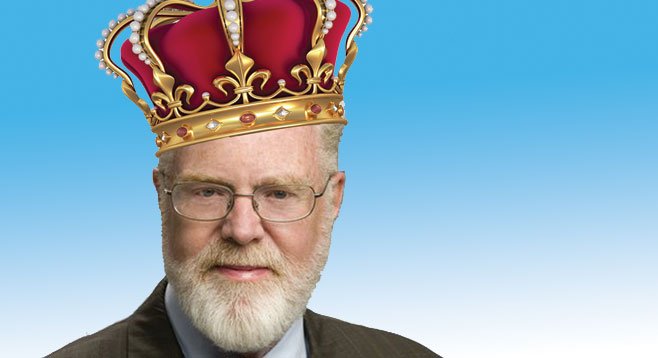 San Diego State University president Stephen Weber received total compensation of $306,856 during 2011, the year he retired, according to a database of state salaries recently posted online by the Sacramento Bee and confirmed by SDSU spokesman Jack Beresford. After Weber came provost Nancy Marlin at $260,259, followed by star basketball coach Steve Fisher, with $244,595. Athletic director Jim Sterk was next at $240,131. Mary Ruth Carleton, vice president for university relations and development, made $234,396. (She was once a TV news anchor on KOCO, a station in Oklahoma City, according to her profile on LinkedIn.)

Behind Carleton was vice president for business and financial affairs Sally Roush, whom many observers described as the power behind Weber’s throne, with $230,400. Below her was Tom Karlo, who runs the university’s KPBS TV and FM radio public broadcasting operation, with $215,262. That’s just a bit less than the $218,004 in compensation paid Doug Myrland, Karlo’s now-retired predecessor, in 2008, the controversial Myrland’s last year at the stations. In 2011, KPBS associate general manager Stephanie Bergsma got just $170,616. (Incoming SDSU president Elliot Hirshman, whose full annual salary of $400,000 has stirred controversy, received $198,419 for his partial year of service, according to the database.)