“This is one of the original places we all fell in love with 20 years ago.” 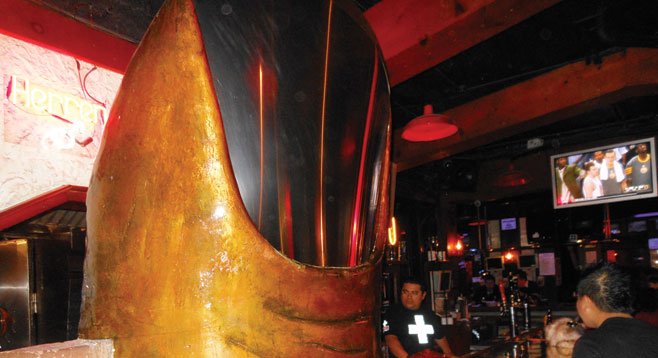 ‘Where have you been?” asks Carla when I get back.

Okay, it’s a little late, and, uh, I failed to mention I was going down to TJ. Last-minute decision.

I’d kinda given up on trying to yank her down there with me, because, well, the problems, and, also, Carla says “her” Tijuana is no more. But I think I’ve found a place that might seduce her back.

“Bedford, cut to the chase.” Then she gives me that queer look. “Oh, of course. You went to TJ, didn’t you?”

“Sweetheart, it was for you. I know about you and hot dogs.” Heh-heh. Carla’s Achilles’ heel? Perros calientes. “There’s nowhere I won’t go. And guess what? Got a tip. I think I’ve found your Shangri-La.” This is no lie. I may really have found the absolute best hot dog, ever. Here’s what happened. I was walking, about 9:00 this evening, passing along Paseo de Los Héroes, ’round the twin-spired independence monument they call las tijeras (“the scissors,” because that’s what it looks like), when I heard music coming faintly from a cantina. Saw some lights down a narrow walkway between buildings in Plaza Fiesta. It feels like the narrow senderos — alley-paths — of a, like, Spanish village. I walk through a lot of dark empty spaces, then, kapow! Twinkling lights, music blasting from a sheltered patio, people sitting and standing around, drinking, eating, talking. A real buzz. I like it. Inside, there’s a crowded bar and a kind of eatery within the drinkery. Eccentric? Uh, yes. For one thing, they have a fireplace at the end of the bar with a chimney that’s a giant thumb. But it’s when a hot dog goes by me — I swear it looks a yard long — all set out on a plank of wood, that I know Destiny has brought me here. I head for a chalet-style retreat labeled “Les Fondue.” I duck through a heavy arched door straight outta Grimm’s Fairy Tales. I come into a cozy space with a dozen wooden tables under heavy rafters. Big brass Swiss cowbells hang from them, and rows of beer steins sit on top of them. On the far wall, a mounted deer head stares down from under his antlers. If everybody around you weren’t speaking Spanish, you’d think you were in Switzerland. I sit down at one of the tables, where I can see back out to the bar. Eduardo González hands me a big shiny menu. I notice all the customers around call him Tío — Uncle. So I ask Tío for an Americano coffee (about $1.25) while I track down that hot dog. Hmm…now that I look at the menu, I see that the main Sótano Dog is an individual size. The one on the plank was way longer. Whatever, each is Hungarian sausage surrounded by Swiss cheese, tomato, onion, and chile guëro (“pale chile”) in a baguette, 79 pesos (maybe $6). The full-length version, Mamuth Dog, “half-a-meter of our grandioso hot dog for 2–3 people,” costs exactly double. Even though the one I saw looked three times as long. Yes, there’s other stuff I can afford: like snails. Escargots “a la Bourguignonne” —mountain snails in their shells with garlic butter, fine herbs, and white wine, 89 pesos, about $7. Or, hey, Fondue de Quesos Suizos, a sexy bowl of melted cheeses on a flame-heated stand, for two, for under $15. But, no. Eyes on the prize: I order up a Sótano Dog. And so-oo glad I did. Ten minutes later, Alfredo Mendoza rings the big bell that’s hanging right beside me in a gap of the “chalet” wall. José Luis lays down the hot dog; it’s sitting on a wooden plank. Shorter than the Mamuth, but still very sexy. There’s a knotty nest of crispy candied onions, tomato chunks, a crooked line of yellow mustard with red balls dotted along it so it looks like a coral snake. The snake twists under the big, fat, roasted chile guëro. It’s all bursting out of an eight-inch craggy-crusted French baguette with unmelted Swiss cheese licking over the edges — the cheese is full of holes. Whew. And, oh yeah, yelling Hello-oo! In here! I’m part of the deal too, ya know! is this giant wiener. Hungarian-flavored — paprika, I think, as I bite in. This ain’t no wimpy canine. One bite and whoo-hoo! As dogs go, it’s hot, hot, picante hot. But the thing is, the sweet, crispy, tangy nest it’s in, plus the crunchy-crusted bun, give it a rico suave taste. I swear, in this dog-eat-dog world, I’ve never had it so good. The guy who created this dog is René Bösiger, from the German-speaking part of Switzerland. He started Swiss Cellar 22 years ago. It’s not just the hot dog that I love here — it’s the whole atmosphere. Juan Hernández, the supervisor who strolls around, seeing how everybody’s doin’, says it hasn’t changed in all that time. The customers have stayed loyal, too. The newest thing is they’ve caught the San Diego micro-brewing bug. Bösiger Beer is brewed right here. Next time, I’ll bring more dinero, so I can try a couple of their brews. Alfredo brings out two of those meter-long hot dogs. They’re for the four-meter-long table right next to mine. Bunch of TJ friends. We get to talking. “This is one of the original places we all fell in love with 20 years ago,” says a gal named Nora. “We still love it. All ages mix together here.” The two long dogs are enough for all eight of them. Decide to save half of mine for Carla. Dunno. Just my big heart. Okay, I’m filling up good on the first half. Plus, you never know: this dog could save my bacon. That was two hours ago. Now I hold out the half-dog and watch as Carla unwraps it. It still looks pretty good. Her face goes from taut to relaxed, a fresh-opened flower. It’s good to see her happy. “Oh, Ed. This does look interesting.” She takes a bite. Closes her eyes. Opens them. Sees me watching. “Don’t think you’re getting any of this. But…guess you’re not in the dog house anymore.” ■