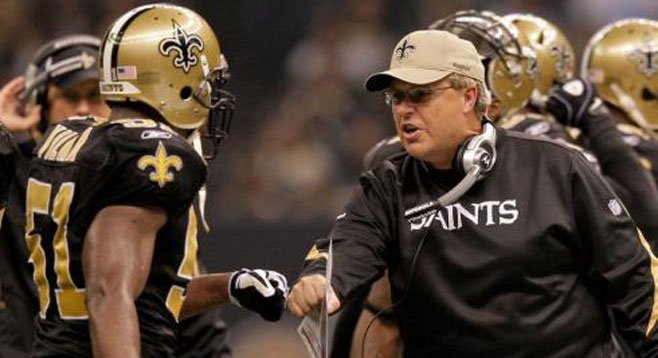 To recap: the NFL released the following statement Friday afternoon, a traditional dump day for embarrassing news. “A lengthy investigation by the NFL’s security department has disclosed that between 22 and 27 defensive players on the New Orleans Saints, as well as at least one assistant coach, maintained a ‘bounty’ program funded primarily by players in violation of NFL rules during the 2009, 2010, and 2011 seasons...”

The Box congratulates the NFL’s security department for their cunning, patience, and classy sticktoitness in carrying out a “lengthy investigation.” Happily, big efforts make for big rewards: The lengthy investigation ultimately revealed the truth about professional football. To wit: there is a piano in the whorehouse.

I was so inspired by the NFL’s security department, I began to wonder if I could join the NFL as a security professional. But, how do I start? What do I do?

Lucky for me, I know a place where I can find unbiased and expert opinion on any topic. I’m referring to About.com, specifically to Timothy Roufa, About.com guide and author of “NFL security careers can be fun and rewarding.”

Okay, Tim, let’s talk about me and NFL security.

Have you spent a lifetime dreaming of making it big and leading your hometown team to the Super Bowl? You’re not alone. Sure, plenty of people are interested in criminal justice careers. Across the country, though, what kids are really hoping for is to make it big playing in the National Football League....

Well, that’s true, Tim. I want to make it big playing in the NFL.

The good news is, you don’t have to be a star quarterback or a bone-crushing linebacker to make it in the NFL.

That is good news, Tim.

Career opportunities abound within the sport of football, from marketing to management and, yes, even criminology-related fields. Believe it or not, you can work in criminal justice and be part of the action on Sundays in the fall.

I want to believe, Tim.

Each NFL team is required under league rules to contract its own security team. The focus of these private security contractors is to protect the members of the team from potential threats. They also serve, in some cases, to protect the players from themselves.

Players are children at heart, Tim. What other duties do I have as an NFL security professional?

Traveling with NFL teams. Providing driving services for players and coaches. Advising players and coaches. Investigating potential threats. In short, NFL security agents are responsible for the overall protection of the physical well-being of the players as well as their professional reputations. Ultimately, the list of their duties is long and varied.

Wow, that’s a lot of work, Tim. I imagine my compensation will be in the six figures with generous, old-school medical and retirement benefits.

NFL security agents do not receive a salary or benefits. Instead, they are paid an hourly rate.... Rates for NFL security contractors can be $50 per hour or more, depending on the services provided.

Wow, $50 an hour is a lot of money, Tim. What do you think, is a job as an NFL security professional right for me?

Working as a security agent for NFL players or teams can certainly be fun and rewarding and may offer a lot of opportunities you might not otherwise get, such as going to the Super Bowl or being on the sidelines with your favorite team.

At the same time, though, it’s a job, not a vacation. Long hours and travel may be involved. Additionally, because services are contracted out, you will likely need other sources of income or another job....