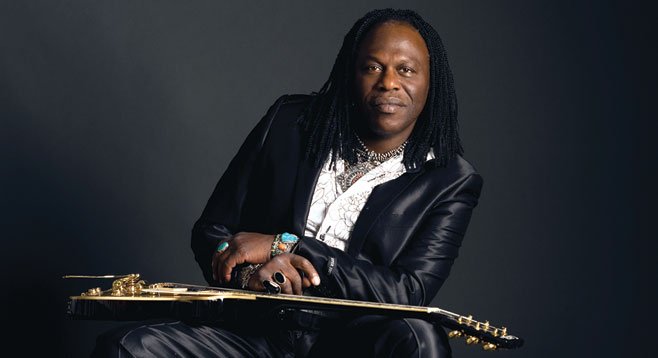 I ask Joe Louis Walker if Hellfire, the title of his debut release on Alligator Records, is short for “hellfire and brimstone.” He says it could be. After all, he does have a background in gospel. “A couple of other people asked me that, too, but I wasn’t thinking about that so much. That’s sort of gospel in reverse, if it is,” he says by phone, laughing. The real explanation, it turns out, is secular. “When [producer] Tom Hambridge got involved in the song and in the writing, it just sort of turned out that way.”

This becomes a recurring theme during our conversation: JLW goes with the flow. “Songs discover you; you don’t discover them,” is an attitude he may have adopted while growing up in Northern California. He was born in the South, but San Francisco is where he learned to play the blues. In the late ’60s, Walker roomed with and took inspiration from Michael Bloomfield of the Paul Butterfield Blues Band, a guitarist who was considered an icon even before his untimely death.

Hellfire is a guitar player’s CD, and it rocks harder than any of Walker’s previous releases. “There’s more guitar-playing than I’ve done in awhile. Lots of slide. It’s the heritage I come out of.” True enough: Hellfire sounds like the psych-blues of the late ’60s and the ’70s. JLW picked up guitar at 8. By 16, he was a known commodity; 23 albums and two DVDs later, he had won four Blues Music Awards and been nominated for 43 more. I fall prey to the lamest of questions, one I promised myself I wouldn’t ask: Will the blues ever be updated? “I don’t know if the essence of the blues can be modernized. Traditional blues is the blueprint. It’s the Bible.”