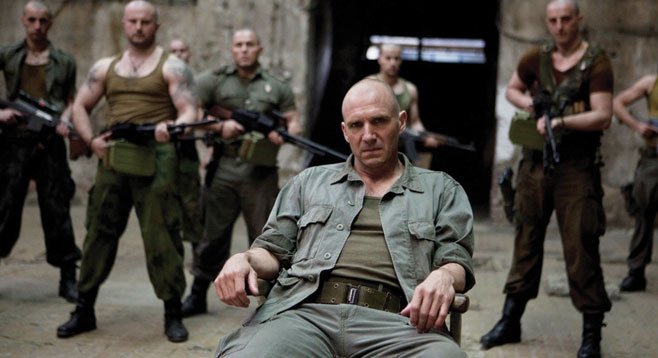 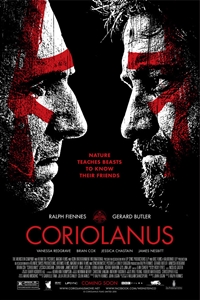 ’Tis a pity he’s a bore. That idea might creep up as you view the creepy Shakespearean “hero” of Coriolanus. Ralph Fiennes directed and stars as Rome’s General Caius Martius Coriolanus. A killing machine who makes George Patton seem a stray kitten, he lives for slaughter, has 27 wounds, and “each gash was an enemy’s grave.”

The big enemy is Tullus Aufidius (Gerard Butler), the bearded Ajax or Hector of the Volscians (the Volsci were rivals of the Romans, their Spartans or in the film’s modern terms, Serbians). Writer John Logan has stripped and reknotted the master’s text, rich in brusque declamations. Rome seems to be in the 1990s Balkans, a dead-zone civilization (one obvious advance: TV anchors speak Shakespearean verse). Soldiers are mostly tattooed skinheads with automatic weapons. Only the feudal hatred of the two great warriors matters as politicians scurry about, scheming deals, rousing the rabble. The most humanly honorable, in a conniving way, is Brian Cox’s Menenius.

Fiennes employs a cruel stare and scowl, close to his Voldemort in the Harry Potters. His “pride” is in a constant state of erection, confusing murder with victory, vanity with patriotism. He scorns the people, and they return the favor. No time for the artful, wooing eloquence of Brutus and Antony in Julius Caesar. This rhetoric is like ammo designed for fast kills, and the British accents don’t always help.

Coriolanus is both imposing and monotonous. Entirely self-absorbed, he lacks conscience. “Inwardness, Shakespeare’s legacy to the Western self,” wrote literary scholar Harold Bloom, “vanishes in Coriolanus and never quite makes it back in later Shakespeare.” The brute betrays Rome in loyalty to himself and resents the pleading demands and reproaches of his mother, Volumnia.

Great once again, Vanessa Redgrave is this Roman she-wolf. We can imagine her suckling Romulus and Remus (by the time she got to Caius, not much milk). Her ethics are brutal but honest, her hauteur like a Corinthian column. She is the one figure in this crude, ugly Rome who seems fit for Plutarch or a painting by Jacques Louis David.

While never pleasurable, Coriolanus has austere power. It is a harsh warning about the price of power militarized, of fascist will substituting for law. The brilliant essayist William Hazlitt saw the problem clearly: “The love of power in ourselves and the admiration of it in others are both natural to man. The one makes him a tyrant, the other a slave.” 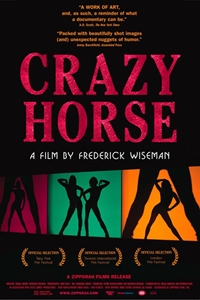 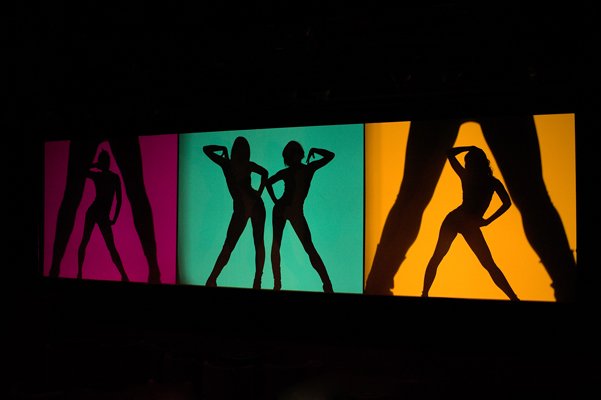 Lured by the title, how many men slinked into Frederick Wiseman’s first documentary, 1967’s Titicut Follies, expecting something in the lusty line of Russ Meyer or Bettie Page? How soon did they stagger out from that candid portrayal of an insane asylum? Finally, after 45 years and 36 Wiseman documentaries, they have their reward: Crazy Horse.

No, this is not Wiseman’s Hospital or Basic Training or State Legislature or even Meat. It slightly overlaps his works on the Comédie-Française, on models, and on classical ballet by depicting the planning, training, and shows of the famous (since 1951) Crazy Horse club in Paris. Women dance mostly nude to recorded music (no bump-and-grind pit band), with fancy lighting, mirrors, digital projections, and some touches that harried director Philippe Decouflé hopes will “impress the intellectuals.”

Well, yes, those Sorbonne savants who crave the almost Cartesian ideal of the Crazy Horse female: small breasts, cello buns, and whippy contortions of pelvis and spine (for the record, the Horse also offers middle-aged male twins who tap dance). Eroticism seems both pampered and distanced, and the club feels like a Moulin Rouge that skipped over Toulouse-Lautrec to get to dynamic pinups of Parisian tootsies. Backstage nudity is simply pretty women getting through another shift.

The shows draw largely tourists, also couples. We hear a funny whiff of the title tune from Charade, also one of the finest of costuming insider remarks: “They forgot one of the tulles while screening Daisy’s buttocks.” A rising director (gay, bald, hip) carries on about the Crazy Horse heritage as if describing a mystical rapture.

As always with Wiseman, now 81, there is no narration or backstory. You can watch as a neutral observer or clammy voyeur. For all the stylish kick, beautifully photographed by John Davey, the core truth is seen when some girls audition in G-strings. They appear nakedly, nervously hopeful. They may dream of sexy glory. Maybe they just need the job. 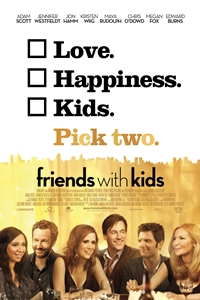 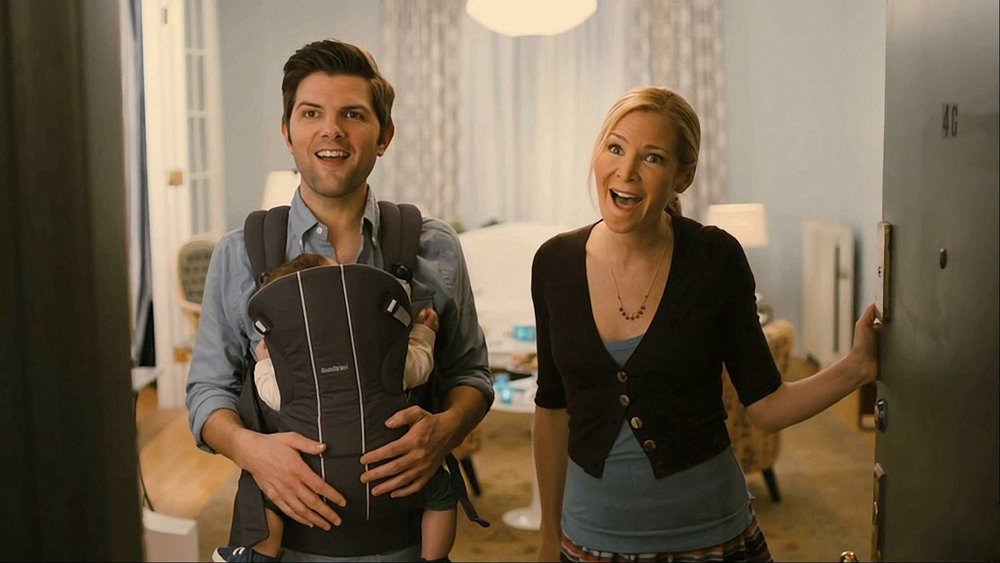 Not afraid to put its worst foot forward, within two minutes Friends with Kids offers its first vagina joke. A minute later, a penis gag. Soon after, the first ha ha about poo poo. More follows, as best friends since adolescence Jason (Adam Scott) and Julie (Jennifer Westfeldt) realize that they love Manhattan bar hopping but also want a baby, without marriage or cohabitation. Their friends make the full package seem exhausting.

Only the brain-drained will not guess instantly that baby Joe will be adorable, making Julie and Jason realize how much they need and love him and each other. But first, by the dumb law of sitcom stretcher logic, she has to enjoy a hunk (Edward Burns) who is perfect but a little boring. And Jason has to relish hot times with a chesty dancer (Megan Fox). The movie is a chatterbox, and the actors seem to be speaking dialogue balloons from a magazine trend story.

Adam Scott is fatuously glib. Jennifer Westfeldt stares at him from over her great cheekbones like sandbags (the Germans might have held Omaha Beach with them). Westfeldt wrote and directed, but let’s not roll out the auteur theory for this one. Let’s roll out plastic to wrap the glossy city views, the baby close-ups, the men’s sex obsession, the cheap embarrassments, the music track à la Woody Allen (old goodies such as Steve & Eydie and Django Reinhardt).

Twenty minutes too long (or is it an hour and twenty minutes too long?), Friends with Kids is jammed with talent: Kristen Wiig, Maya Rudolph, Chris O’Dowd, and — firmly destined to star in The Mitt Romney Story — Jon Hamm. Nobody shines. When Julie jokes about terminal cancer, Ed Burns asks, “Why is this fun?” Surely he means the whole movie. 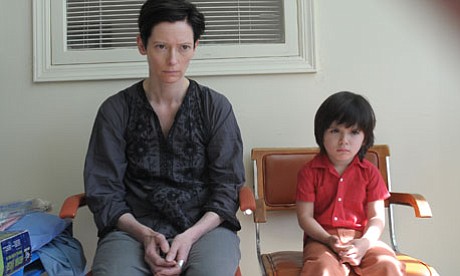 Lynne Ramsay, who directed Samantha Morton so well in Morvern Callar, has made the brooding teaser We Need to Talk About Kevin. In it, hardly anyone talks smartly about Kevin. We first see his mom (Tilda Swinton) wallowing with bodies in a mosh pit of blood (animal, we presume). She is full of agonized remorse, and the story is her guilt trip in a town that hates her. Son Kevin became a murderous sociopath. The film looks back after the slaughter with a slow drip of morbid significance.

This British production is set in a prototypical American town, rotting into the American Dream deranged. Poor Swinton, gaunt as a rake, looks about halfway to Donatello’s emaciated Mary Magdalene. Her dorky husband is one of John C. Reilly’s walking, talking hamburgers. Three boys play Kevin. The youngest is ripe for Seed of Chucky. The oldest (Ezra Miller) is a cold, vile teen with a demented sneer.

Songs stretch “suspense,” and Seamus McGarvey’s photography makes fine use of lighting, colors, and billowing curtains. When philistines say that enigmatic art films are pretentious bores, they are not invariably wrong. This one creeps toward horror with artful dodges and then has the vapid good taste to not show the carnage. Is the depiction of archery meant to provide classical resonance, an ancestral echo of Agincourt or Troy? A fine but sterile question. All the urgent, practical, and clinical questions are lost in script fog.

Reviewed in the movie capsules: Project X and Silent House.

I think those were tomatoes that Tilda was wallowing in, not animal guts.

Those must have been mashed or stewed tomatoes. But clearly meant to suggest blood. Anyway, thanks for attending to the nuances. As a famous architect said, God is in the details.