“This isn’t just an individual thing" 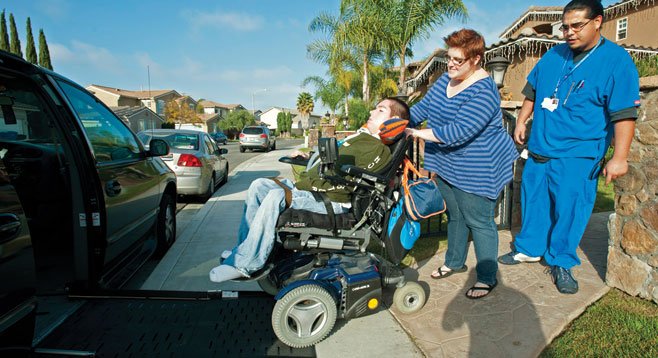 In the fall of 2010, Raul Carranza arrived on the campus of the University of California Los Angeles by way of Eastlake High School and Southwestern College, pursuing a psychology degree. By the following January, he had been forced to withdraw and return to Chula Vista to live at home with his parents and younger brother.

Carranza hadn’t been kicked out of school due to academic or disciplinary issues. Instead, on his 21st birthday, Medi-Cal cut his services, which included round-the-clock nursing care that he needs because he has muscular dystrophy.

“Muscular dystrophy is a progressive disease. It gets worse as you get older,” Carranza tells me, speaking with the assistance of his afternoon nurse Laura, when I visit his home in early January.

Carranza has been diagnosed with multiple forms of muscular dystrophy, a name that’s used for a number of genetic diseases that cause muscle weakness and wasting, usually of skeletal muscles but sometimes of muscles that enable breathing. None of the textbook definitions of the various dystrophies have hit precisely on the symptoms from which Carranza suffers.

Carranza was diagnosed with the disease when he was 2 years old. He says his parents were told he was unlikely to live another 12 years. When he was 14, he had a tracheotomy to replace a breathing apparatus that covered his face with tubing that is attached to his neck. The operation has left his speech raspy and nearly inaudible.

About the time of his operation, his insurance was canceled because he had reached the maximum lifetime benefit. Medi-Cal, which is California’s version of Medicaid, a health-insurance program for low-income individuals, then began to provide nursing care through the Home and Community-Based Services Waiver program, set up to waive certain Medicaid requirements for people who would otherwise require institutional care.

Carranza says that under the current Medi-Cal structure more money is available for minors than for adults, though he alleges that the program “is looking for any excuse right now to cut funding from a lot of people.”

“I have lost the ability to walk, move my arms, and breathe,” Carranza says. Despite this, he attended community college and UCLA. He was in the process of changing his major to computer science when Medi-Cal changed his classification from “acute,” meaning round-the-clock care was paid for, to “sub-acute,” which pays for only 11 hours of nursing a day. He was forced to return home and seek private insurance.

Raul uses a USB touchpad to operate his computer.

When we first spoke in January, Carranza was enrolled again at Southwestern, where he was taking computer science classes, using a USB touchpad to operate his computer. But by February he had put his education on hold. “I had to drop out this semester in order to be able to dedicate all my time to my case. It has actually turned out to be a great decision because there’s no way I would be able to fight this and go to school at the same time.”

His nursing services were to be cut immediately following his 21st birthday, on October 21, 2010, but because he requested a hearing to reassess his condition the reduction was postponed.

At the hearing, the administrative law judge agreed with Carranza’s claim that his condition warranted the acute classification. The judge’s ruling, however, was struck down by the head of Medi-Cal, David Maxwell-Jolly, who decreed that the sub-acute diagnosis should stand. He also denied Carranza a new hearing.

Maxwell-Jolly has since been promoted and Medi-Cal has a new head, but Carranza has no further options within the system, since his request for a rehearing was denied. The only course of action remaining is to file suit against Medi-Cal demanding treatment, something he hopes to do.

Although Carranza received help from a legal aid attorney, he says that his lawyer “had to drop my case because his funding got cut by the state as well.”

“He’s still keeping his ears to the ground, his eyes open for representation,” Laura says.

In the meantime, in August 2011, Carranza enrolled in an Anthem Blue Cross program for high-risk individuals, which is subsidized by the state through tobacco tax funds but still costs his family $450 per month. The insurance provides up to $75,000 in yearly benefits, but the gap left by Medi-Cal’s reduced funding costs $12,000 per month to fill, meaning he’ll run out of benefits about halfway through the year. He says many bills went unpaid last year because he reached the maximum benefit provided by the Anthem policy before year-end.

While Carranza believes he will receive some help from the recent changes in federal health-care legislation, such as the lifting of lifetime benefit caps, he doesn’t believe the new laws go far enough. “While they are going to help, there will still be a lot of people that are going to fall through the cracks,” he says. “I believe in universal health care, so that’s kind of what I’m hoping for as one of my long-term goals in this fight.”

“It’s not just about going away to school,” Carranza tells me. “I want to live an independent life. What the state wants is to shove disabled people under these programs into nursing homes. I’m sure you’re aware that nursing homes, especially state-run nursing homes, aren’t exactly the best places to be.”

Carranza is fighting to raise awareness and trigger policy changes not just on his own behalf but for others. He tells me about a woman who has to provide 16 hours of care each day for her 30-year-old quadriplegic son, as Medi-Cal provides only 8 hours and she can’t afford private care.

“This isn’t just an individual thing. This is happening to a lot of people who don’t have the resources and can’t fight because they’re too busy just trying to survive,” Carranza says. One of the others he speaks of is close to him.

“My brother has the same condition,” Carranza tells me. “He’s about to turn 21 this year, and he’s going to go through the same thing.” 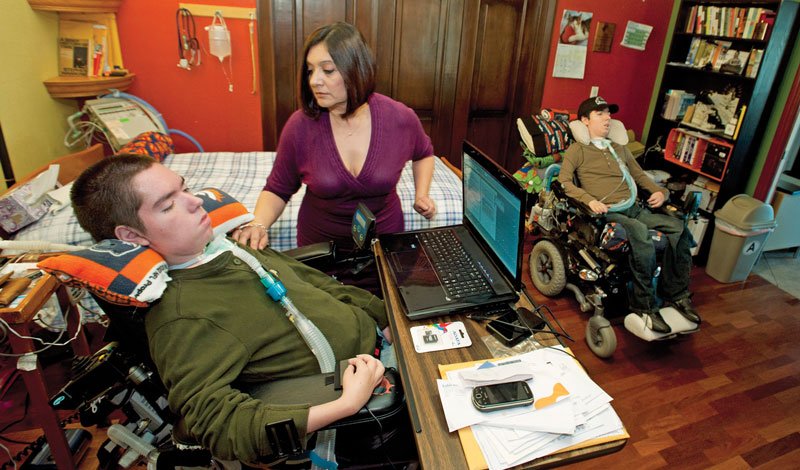 Laura stops speaking for Carranza and adds some words of her own. “This is going to be kind of catastrophic for the family,” she says. “It’s literally life and death at some point, because if they have two kids in the same condition and no nurses, and maybe only one parent at a time can care for them, it puts all three of them in danger — the boys and the parent — to be constantly shuffling between two children that might both need emergency nursing services at one time.”

An online petition is circulating at the Change.org website demanding that Medi-Cal restore Carranza’s acute level of care. As of last week, more than 2300 signatures had been collected.