Is This Mic On? 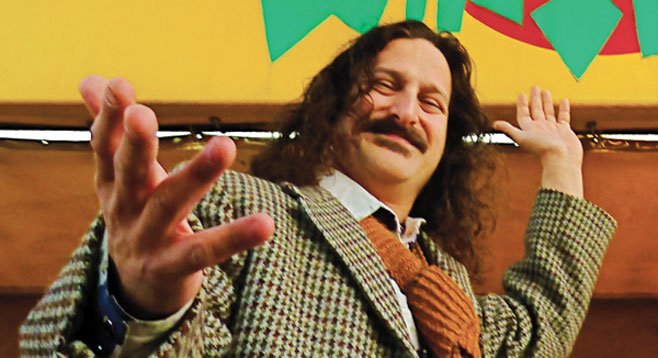 Jefferson Jay says the open-mic scene that launched Jewel and Jason Mraz is not as vital as it once was. Jay, who started hosting acoustic showcases in 2003, thinks, however, that there is still enough interest and talent for one more acoustic showcase in town.

Jay, who has an SDSU masters degree in history and works as a substitute teacher by day, has experienced highs and lows at the eight venues where he has anchored open mics.

“When I first came to San Diego in 2000, I played at Twigg’s and Lestat’s. I took time off when someone broke into my apartment and stole all my equipment. When I came back in 2003, I started hosting my own night at Twigg’s on a volunteer basis. I built it up and decided my skills were worth something.” Jay says he started getting paid a guaranteed fee to host his own open-mic nights, which meant he was responsible for promoting, hosting, and sound mixing.

“I started one at Tom Foolery’s near the Sports Arena, but that place went out of business. Then I went to the Blarney Stone. I built it up, but once I got it going, they fired me and kept [cohost] Allison Gill. The owner had a temper.” Jay’s next stop was O’Connell’s (now the Griffin): “After a year-and-a-half of doing Hot Fudge Sunday there, they fired me.”

When his Tuesday night music flourished, Portugalia added music six nights a week. Jay says one of the other weekly hosts, who catered to a female clientele, got it all wrong.

“I wouldn’t treat guests the way she did. She had to be the diva, the center of attention. One time [rapper] Miss Liberty performed, and this host would actually talk smack about her onstage while she was performing. Her night got real clique-y.”

Jay says he left Portugalia when that ship started sinking.

“The owner had gone in arrears. The city came in and told him he could not have amplified music. People from the city would actually come in and make sure our open mic had no microphones. Then he lost his [permission to sell] alcohol. I just resigned. Now the business is closed and the building is for sale.”

Jay’s new rules for success: he’ll do the jokes (“Nothing kills a music open mic more than an unfunny comedian”) and no egos.

“A lot of people on the acoustic scene can be catty to one another. And sometimes they hoard the crumbs of opportunity that come their way.... No one wants to go and watch a prima donna.

“It’s tough to stay enthusiastic about music in San Diego, long term. There’s next to no opportunities out there.” He points to former open-mic regulars such as Michael Tiernan, Jane Lui, Sara Petite, Curtis Peoples, and Tom Brosseau as bright lights who have moved on from local open mics.

“It seems like everybody from San Diego who makes it ends up leaving, start playing bigger venues, or they start having families and just quit.”

Jay, who has lived in O.B. for six years, says, “A lot of people think Winstons is expensive. This is a free open mic with happy-hour prices.... Winstons knows what it takes to make things work. They’ve had José Sinatra’s karaoke on Sunday and a Grateful Dead Monday for years. It’s good to be part of an organization that supports things long term.”