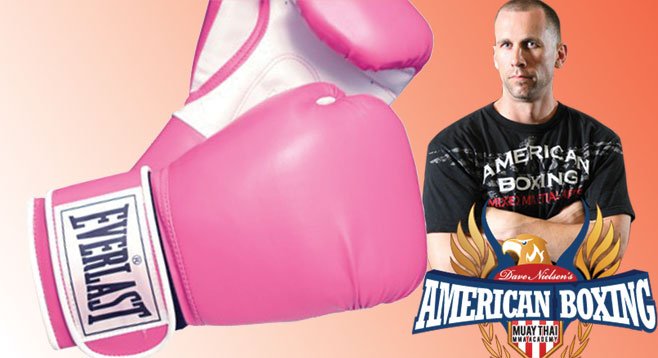 Patrick’s a little jealous of my new exercise regimen. I told him we should work out together, but he doesn’t want to belly dance. So we looked into boxing.

“We offer Western boxing,” said Dustin, the morning manager at the North Park branch of Undisputed Fitness and Training Center (619-299-2699, undisputedusa.com). “The demographic here is about 50/50 guys and girls. You’re welcome to come by and take a free class.”

What does the class entail? “You start by jumping rope. Then you do some shadow-boxing, where you get your hands up and throw combinations. The coach will critique you and tell you how to do proper footwork, how to get full extension on your punches, how to sit down on your punches, how to bring your hands back to your face after a punch. Also, how to cut angles — moving forward, backward, and laterally. It’s an art form.”

Undisputed sells boxing gloves and gear, “But if you buy a full membership, we’ll give you gloves. Membership starts at $85 a month. You can purchase six months or a year. Classes are included with membership.”

“Muay thai is similar to Western boxing in that you wrap your hands and punch, but there are more weapons: the hands, the lower legs, the knees, and the elbows. There are four times the weapons to think about, and the number of combinations is exponentially greater. About half our members are female, and they seem to go for muay thai. It seems they like to kick, and they pick it up pretty quickly.”

The kicking in muay thai, said Nielsen, “is different from karate or other kicking styles because we rotate the core, just like you do when you swing a baseball bat. In karate or tae kwon do, you use a snapping kick for speed. We go for power; that’s why you rotate your hips through the kick. When you kick the bag or the pads, there’s a torquing effect on your core, and it gives you an amazing workout.”

Classes are small, eight to ten students, “so we can focus on technique. As you get stronger and start swinging harder, you can hurt yourself if you don’t have proper technique. On your first visit, we give you a free half-hour lesson before class. We run through the basics, so you don’t feel awkward because you’re doing something new. At the start of class, you’ll do a warm-up: skipping rope, push-ups, basic calisthenics. We want you nice and warm, with your muscles full of blood. The warm-up is actually the hardest part of the class, but it helps to prevent injury. Then you’ll do shadow-boxing. As a beginner, we’ll give you assigned combinations, so you don’t have to try to be creative while you’re getting that muscle memory.

“It’s also an excellent form of self-defense,” added Nielsen. “Using the proper techniques, a 100-pound woman can knock out a 200-pound man using muay thai, because she’s using the hardest parts of her body: her knees, elbows, and lower shin. The idea is that a woman wants to make a devastating blow and then run. In a gym fight, when someone clenches you, you have to strike immediately. Same thing in a self-defense situation. It becomes your natural reaction.”

As a final word of advice, Nielsen warned that “when something gets popular the way muay thai has, you get people popping out of the woodwork, making claims about their ability to teach it. Do your research, make sure your instructor is credible. See if you can find videos or at least photos online of them competing.”

American Boxing offers a variety of classes with membership. “The schedule is on the website. Cost is around $100 a month, depending on length of enrollment.” Equipment (gloves, shin guards) is included with some memberships.

I don't know how many clients they will get at $85+ per month, but good luck.

@SurfPuppy619 Thanks for the well wishes! We actually have hundreds of students who train with us at American Boxing here in Pacific Beach. $85+ per month for a "Hobby", that is THE BEST "Workout" around, a great "Self Defense", a "Sport" and a "Social Network" of cool positive fun people looking to improve their minds and bodies, not to mention becoming super badass while maintaining the humility bred in Muay Thai's roots to Buddhism isn't a very hard sell. haha

My school has been in PB since 2006, just last year moving across from Vons (inside Republic Training Center)...

You can actually begin training Muay Thai @ American Boxing for just $25 with no commitment so you can experience what Thai Boxing (Muay Thai) is all about!

Give us a call or visit our site http://www.americanboxing.net

My gym has a number of heavy bags and classes, and I hit the bags every workout-surprised at how tough it was when I started years ago. Still can't hit the heavy bag longer than 15 minutes without being wiped out.

I will stop in and check it out ASAP.