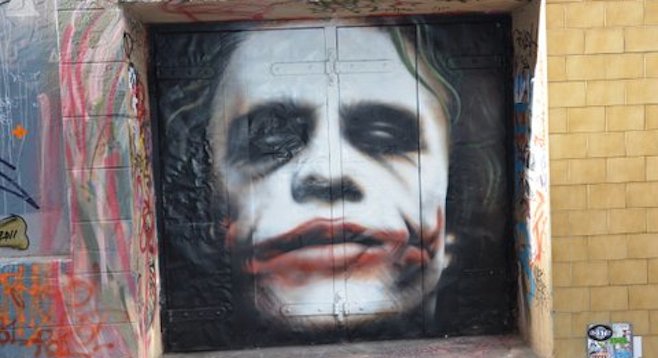 Across the street diagonally from Federation Square – a celebrated architectural icon and Melbourne cultural center – is a hidden laneway named Hosier Lane.

It’s here where I start my urban encounter with the street art of the second-largest city in Australia. Melbourne is perhaps one of the most vibrant, creative scenes the world over for street art ranging from spray-painted murals and stencils to paste-ups.

I’m confronted with a larger-than-life mural of the Joker from Dark Knight – a tribute to the late, great Australian actor Heath Ledger.

Over on Degraves Place is a paste-up from the Melbourne street artist Be Free. Known for whimsical imagery reminiscent of the innocence of childhood, her paste-ups reflect optimism for the future. This one is of a child with pigtails pouring paint from a can, as if creating a rainbow of opportunities. The same girl appears in other secreted alleys with equally alluring messages.

In Chinatown is one of my prized discoveries. At the end of Croft Alley and Paynes Place, past the graffiti, is a portrait of a man with a tattooed face, puffing on a cigarette. Nearby on a side wall is a spray-painted portrait of a seductive woman gazing skyward. Her message seems to be a mix of reality lightened with dreams of hope.

The thing about Melbourne street art is that it is scattered in several places across the city – along hidden laneways, alleys and even sidewalks. To discover the nooks and crannies requires a map; you won’t stumble on it easily.

Be sure to stop by the information booth in Federation Square and pick up a free map identifying street art locations. Best place to start is Hosier Lane and Rutledge Lane. For a more in-depth perspective, try a street art tour run by street artists: melbournestreettours.com.

My favorite way to learn about street artists like “Be Free” was the 3-hour walking tour that includes local designers, boutique stores and coffee culture along with street art. Offered by Hidden Secrets, the tour is called Lanes and Arcades Tour and includes a hot chocolate stop and tasting as well as lunch.

Melbourne’s street art represents a significant cultural movement among artists looking for outlets of expression. What’s great about the city is that they have embraced this art form as a legitimate outlet. (Graffiti and tagging are not street art and are considered illegal in Melbourne, as opposed to commissioned street art.)

One thing’s for sure: Street art is, by nature, constantly changing and evolving. So what you see and photograph this year may be entirely different than what you see when you come back next time.

That’s the statement, and inherent beauty, of urban street art in Melbourne.