Hopping and Crawling through Dublin 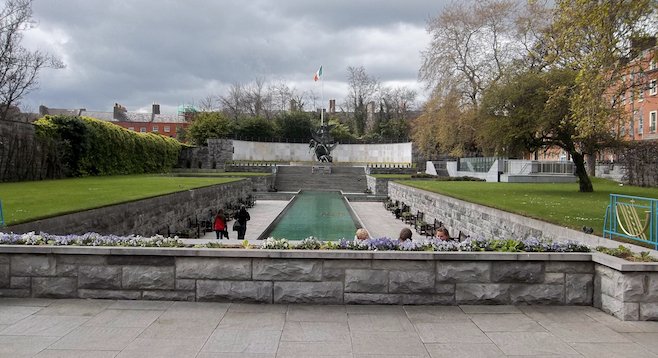 “I don’t know where they went. There are usually plenty of them here.”

My Servas host in Dublin had driven me up to Phoenix Park overlooking Dublin to see the herd of deer that could normally be spotted wandering across the park's open spaces. Herds of fallow deer have been wandering here since the 17th century, so it was odd that they vanished just as I arrived.

After driving around a bit, we discovered that it was the eve of a big race in the park. Thousands were expected, so the deer were presumably relocated. My host was disappointed, but decided that my consolation prize was a view of the residences of the President and the U.S. ambassador to Ireland, both located here.

My host's residence was in a suburb of Dublin that encircled the huge Blanchardstown Mall, the UTC/Fashion Valley of the Dublin suburbs. (Yes, they have gigantic malls in Ireland too.)

I had no desire to visit Blanchardstown, however. I had only one day to explore Dublin at the end of a whirlwind visit of Ireland – and I didn't come here to see a mall. I whittled my list of must-see places to just a handful. Heeding the advice I’d been given not to drive in Dublin, I ditched my rental car. The Hop-On Hop-Off bus would be my mode of transport around the city.

"Catch the Hop-On Hop-Off right over there across from that horrible spire," the bus driver advised me. The Dublin Spire is the world's tallest sculpture, but my driver was unimpressed.

My first stop was Kilmainham Gaol. It’s here that Irish political prisoners sacrificed everything for the freedom of Ireland. It was a bit eerie to be pointed out the various spots where executions occurred, but it certainly impressed upon me the sacrifices the Irish made in order to obtain their freedom.

Both of my Irish Servas hosts succeeded in persuading me to visit the Garden of Remembrance, a sacred memorial spot in Dublin. It hadn’t been on my radar in pre-trip preparation, but I soon discovered the significance the spot holds for people throughout Ireland. It memorializes and celebrates those who gave their lives for the cause of Irish freedom. My hosts both spoke of how moved they were when Queen Elizabeth visited, laid a wreath at the Garden, and bowed her head in recognition of the Irish who gave their lives while rebelling against British control. This was an unprecedented moment in Irish history and incredibly cathartic.

"I can't think of anyone who wasn't moved by that," one of my hosts remarked.

The Writers Museum is a must-stop for anyone with a literary bent. There are exhibits of centuries-old tomes and biographical descriptions that sometimes began with such inviting statements as, "He was a lonely and miserable man.” (This was a writer I hadn't heard of, but there’s plenty of detailed information associated with the titans of Irish literature: Joyce, Yeats, George Bernard Shaw and Oscar Wilde.)

There are also artifacts on hand such as the personal typewriters of authors. Set aside an hour or so if you have any interest in Irish literature. The Writers Museum is directly across the street from the Garden of Remembrance.

The Book of Kells at Trinity College is a popular spot for visitors to Dublin to appreciate a truly inspirational historic artifact. But at a cost of nine euros, many find the brief glimpse of the time-worn tome a dubious price. The National Museum of Ireland, however, is free. This was a godsend, since my debit card was rejected by the only nearby ATM. Those with an interest in archaeology and the history of Ireland will find it a worthwhile stop.

A fun way to round out your visit to Dublin is to take either a music or literary pub crawl. This will give you a sense of the pub culture – and no visit to Ireland is complete without sampling some of the local music.

The driver I had when returning to my original bus stop for the Blanchardstown connection was a hoot. It was difficult to tell whether he was genuinely cranky, or if that was just part of his comedy routine for tourists. He routinely called folks in his way “pricks.” At one point he sounded off to nobody in particular after a confused tourist asked him directions.

"Bloody Americans, always getting lost. It's amazing you made it to the moon."

This was quite the contrast from the informative but somewhat sterile commentary of my first driver. After all the kind, generous Irishmen I met on my trip, it was actually somewhat refreshing (and humorous) to run across a crank.

Hope none of those deer crossed his path.

Author's note: Servas is an international organization founded in 1949 and based on principles of international peace. It could be considered the original Couchsurfers. I first heard about it years ago from a friend who sparked my interest in traveling overseas. He had taken advantage of his Servas membership to stay in the homes of local people throughout the world.

I've had terrific experiences staying with my Servas hosts. I still keep in touch with the people I visited and consider them friends.

I cant believe you didnt want to go the mall in Ireland! :)

Maybe next time. I wonder if they have a Walmart.