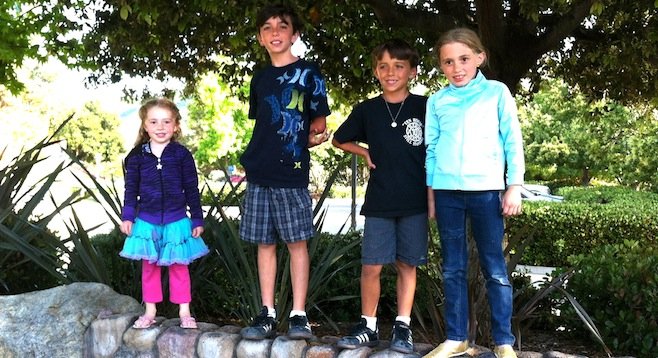 First it was David and Liam who disappeared into the other room. Sean was next, followed by Heather a few minutes later and my mother not long after. “You’ve got to make him stop,” Jane whined in my ear. “I need to put the kids to bed, and I can’t unless you stop David.”

“I don’t even know what’s going on in there,” I said, and continued to swipe through my Instagram feed. Jane sighed dramatically and poked at my legs and arms in an attempt to irritate me into action. When that didn’t work, she positioned her face close to mine and made a painful moaning noise, which earned her a threatening glare. Finally, she gathered herself into a loose-limbed standing position and slumped away, toward the nexus David had created.

David’s antics, I would soon find out, were an appropriate finale for what had been a day of smoke and mirrors. My two older sisters’ children have recently discovered magic tricks. Liam, who is the eldest of my niephlings at ten, had beseeched me to pick a card from his deck before I’d finished greeting everyone.

While Sean was tending to the ribs and chicken on the grill, the youngest in attendance, five-year-old Olivia, busted out her own bit of sorcery. She placed a small toy under one of two upside-down cups on the table, moved them back and forth, and then asked us to guess, “Which one?” The trick might have worked save for one small detail, which seemed to escape the mini enchantress: the cups were translucent.

After dinner, we were all lounging when David summoned Liam into the adjacent room. Eventually, when I’d finished with all my social-media phone-surfing, I trailed behind Jane to find out what was holding everyone’s attention — an impressive feat, given my family members’ short attention span.

I found a seat next to Sean on the two-cushioned sofa that faced a longer couch and coffee table, around which the rest of the crew had gathered. Once I saw the four glasses and three knives, I realized what was going on — David had presented Liam with a classic bar trick turned physics puzzle.

“Don’t say anything,” David said. “I’ve already given them hints.”

Mom leaned forward and picked up two of the knives. “What if you did...like this,” she said.

“No offense, Mom, but do you seriously think you could just walk in here and solve a physics problem that Sean hasn’t solved yet?” She ignored me, as did everyone else. Heather grabbed the third knife and moved one of the cups to attempt to balance it with the other two that Mom held.

“No — you can’t move the cups,” David said with an undertone of frustration that told me this wasn’t the first time he’d stated that rule. “And, remember, you have to use all four cups and all three knives. That was one of the hints. Also, this one,” David held up a cup containing the same toy Olivia had used earlier, “Could be filled with water. It doesn’t have to be — obviously — but it could be.”

“Did you tell them that the fourth cup should be higher than all of the others?” I asked.

David narrowed his eyes and shushed me. “Liam’s a very smart kid, the whole point of this game is for him to figure it out,” David said.

“It kills me that I haven’t come up with a solution,” Sean said. “I just know that it’s going to seem so obvious after he reveals it.”

“Actually, Mom and Heather are pretty close to solving it,” I said. “Which is funny, seeing as, like me, they’re not mechanically minded. Maybe it really is a ‘think outside of the box’ dealio.”

“Jane, are you googling this?” David shook his head as Jane tapped away on the keyboard of her laptop. “Never mind. Of course you are.” He sighed and rolled his eyes for my benefit. “Don’t share anything you find, it will take all the fun away from Liam.”

“Don’t worry,” I said. I was familiar with Jane’s googling abilities. “She probably searched for ‘physics games.’ Good luck with that, Jane.”

“Nothing’s coming up,” Jane complained, but I knew what she meant was, “Too much is coming up, and I don’t know how to parse it.”

David was right — Liam is a smart kid, and I’m not just saying that in a biased family way. He’s ten years old and already breezing through thick Orson Scott Card novels. Earlier that afternoon, he assisted his father in building a computer, and for a school project, he built a detailed replica of the Mission Basilica San Diego de Alcalá using Legos.

I watched as David coaxed Liam closer to a solution. I smiled at what a great uncle my man turned out to be. He never wanted kids of his own (he’d had a vasectomy before we met), but he makes an effort to interact with each of his niephlings in a way that is most befitting the individual child: for Brian it meant introducing him to new experiences, for Olivia it meant listening intently to her stories, for Bella it meant encouraging her interest in photography, and for Liam, it meant challenging his intellect.

Perhaps it’s because we’re rarely around children, but whatever the reason, David and I both speak to the kids the same way we do to adults. This seems to entrance the prepubescents in a way that tells me they’re not accustomed to such treatment. As David once put it, “Most people underestimate kids.” We enjoy our role as the only child-free pair in the family; the eccentric, cosmopolitan couple that can reveal to our siblings’ kids all things new and strange and challenge their worldviews.

It was an hour past Liam’s bedtime. He leaned against his mother’s legs, and Heather stroked her son’s hair as she continued to stare at the pieces of the puzzle on the table. Sean had already given up thinking about it — he leaned back into the sofa and continued to nurse his imperial stout. Heather and Mom were still fussing with the knives. Jane let out a great big huff and closed her laptop with a slap. “I need to put the kids to bed,” she said, more emphatically than all the previous times she’d said the same thing during the past hour.

“Okay, okay, here’s how you do it.” David leaned forward and everyone followed suit, watching his hands as he arranged the knives so that they were balanced on the three glasses and formed a sturdy triangle in the middle, on which he placed the fourth glass. “Now you do it, so that you can be sure to re-create it when you show this to your friends,” David said to Liam.