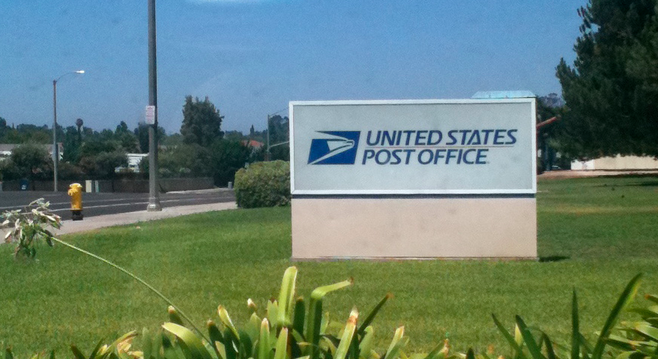 Earlier this month, the United States Postal Service announced that it had withdrawn its plan to close hundreds of post offices around the country. Two San Diego County post offices were on the list, as reported on August 21, 2011.

Both Vista's mail-sorting facility for zip codes 92083 and 92084 (which also offers a few customer services) and the 92140 post office at the Marine Corps. Recruit Depot will remain open.

Eva Jackson, spokesperson for San Diego area post offices said that Donahue was talking about service cutbacks in rural branches (like Palomar Mountain 92060), not any of the smaller post offices in the urban areas (such as Cardiff-by-the-Sea 92007 or Bonsall 92003).

The only facility in San Diego affected by the closure plan will be the Midway processing facility. The large gray building, at 2535 Midway Drive, has long been recognized as San Diego's main post office. While only a few blocks from the post office's loading facility at the San Diego airport, it has become outdated by faster and cheaper automation processing at the newer Margaret L. Sellers facility in Rancho Bernardo. This will be the last round of proposed post office closures for the time being.

The post office tried to close some 3,000 post offices in 2009, and again in 2011. Public outcry and pressure from Congress led to the plan to cutback hours rather than closing what is, in many communities, a town’s identity — one's local post office.

Saturday:UPS sees lost revenue coming like a tidal wave Sunday, post office realizes that they will default on pension obligations/payment. Tuesday give Postal workers a 3.5% raise Wednesday give the workers a no work stoppage guarantee Thursday default on pension payment-declare bankruptcy Friday have taxpayers pay for raise-no work stoppage guarantee and amount defaulted on pension fund. with a 19 billion dollar interest free loan with no collateral.

I think you meant "USPS" in that posting, not UPS.