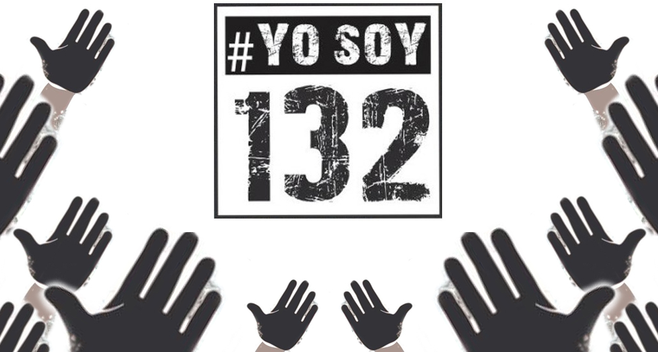 Riled-up students representing the Mexican national student group #yosoy132 staged a demonstration outside the Tijuana offices of Televisa on July 28,  echoing similar demonstrations in Mexico City that have been occurring since last week.

The group, reportedly composed of about 150 college students, says that the television corporation gave preferential access and a favorable bias to the current president-elect, Enrique Peña Nieto. The group attempted to block entry into the station, but the success of their action was not clear in the report proffered by Tijuana’s daily Frontera.

Wearing the internationally ubiquitous Guy Fawkes masks of “Anonymous” fame and carrying banners and placards with slogans such as “Televisa washes brains, and the PRI launders money” (a reference to Peña Nieto's political party) and ”Effective suffrage without imposition,” the group seeks to reduce the influence of the professional media on elections.

Juan Masia, identified as one of the demonstrators, said the gathering outside of Channel 12 Televisa was a protest of elections won "by the manipulation of media in our country, especially by the Televisa–TV Azteca duopoly."

During the campaign (which was reportedly riddled with corruption), there were accusations by the group that the winning candidate had preferential access to air-time via interviews and campaign commercials that were not granted to the other candidates, thus skewing public opinion.

Peña Nieto’s trouble on the way to the presidency erupted after he gave a May 11 speech at Mexico City’s Universidad Iberoamericana. In that speech, Peña Nieto took responsibility for a 2006 incident in which — as governor of the state of Mexico — he called in police to quash a protest. Two people were killed and at least 26 women were reportedly raped.