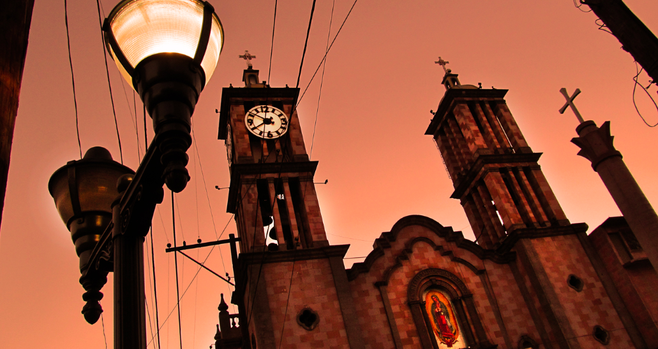 The Catedral de Nuesta Señora de Guadalupe (Church of Our Lady of Guadalupe) in downtown Tijuana was bestowed historical monument status on Sunday, July 23. Construction of the church, located on the corner of Niños Héroes and Calle Benito Juárez (2nd St.), began in 1909 and is the first historical building granted such status in Baja California.

The honor was delivered by Mexico’s National Institute of Anthropology and History. The proceedings took place at noon in the recently renovated plaza in front of the church. Archbishop Rafael Romo Muñoz and government officials presided.

A highlight of the ceremony was the pealing of the restored church bells in the clock tower. The bells had not been heard in a decade, and their ringing tones, just prior to their decade-long retirement, had struck a bit of a sour note. On Sunday, the restored bells reverberated richly and could be heard blocks away from the cathedral. The hour chimes followed the melody chimes, and the melodies will change every month.

The bronze bells were refurbished in the interior of Mexico with funds raised for the project by Cultura Sin Fronteras. (Culture without Borders). A plaque commemorating the event is now affixed to the church’s exterior front wall, and the clock chimes have continued on schedule, dictating the hours of the day, starting at 6 a.m. every morning.