Beer and Barbeque, in That Order 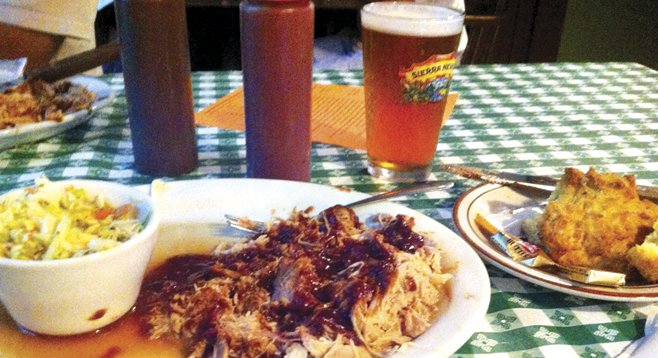 We wound up Highway 79, listening to Wilco’s and Billy Bragg’s re-release of their collaboration with Woody Guthrie, bopping our heads in time to the music and enjoying the meandering road. It was Father’s Day weekend and my small family was headed to the Julian Blues Bash at Menghini Winery. As we drove, we discussed our dining options for the first evening of a three-day weekend in San Diego’s mountain village. My husband had his heart — and mouth — set on the Bailey Wood Pit Barbeque because it also now houses the Julian Brewing Company — though, as of Monday, July 2, Tom Nickel, head brewer and owner of O’Brien’s in Clairemont, and his wife Lindsey would no longer be a part of the brewery. Owners Vince and Gina Marsgalia, of Pizza Port fame, are still onboard, however.

After checking into the Orchard Hill Farm Bed and Breakfast, we strolled up to Bailey’s. The restaurant opened in the 1970s near the site of one of Julian’s original houses. Walking up the porch and through the front doors, you feel as if you are stepping into a dining hall for ranch hands. The place was packed. Kids ran around the sturdy wooden tables adorned with plastic green-and-white-checkered cloths and cheery flowers. Wood smoke wafted in from the kitchen, reminding us of what we were here for.

As we looked over the menu, I noticed the waitstaff going back and forth between the building that houses the barbeque and the saloon, which sells the beer. Both my husband and I were curious to see what the Julian Brewing Company had to offer: we’d been coming up to the mountain for years and had yet to find decent beer. The fact that two such denizens of the San Diego brewing scene had set up shop here was exciting. (Not only for us — Reader contributor and beer connoisseur Brandon Hernández reviewed Bailey’s in May!) So when the waiter came over to see if we had any questions, we ordered two Julian Brewing Company 1870 IPAs before glancing at the food menu. When the beers came, they were crisp and hoppy with a clean finish. At 6.4 percent alcohol, they won’t knock your socks off like many local IPAs and double IPAs, but they go well with the sweetness of the barbeque sauce served with the meats.

With our beers in hand (and a soda for our son), we turned our attention to the food menu. It’s pretty standard as far as barbeque fare goes: ribs, brisket, tri-tip, pulled chicken, and pulled pork. We split a Caesar salad to start ($6) and were pleased that it was not overly dressed and that the lettuce was fresh — a vibrant green with lots of flavor. Then it was on to the meat.

The half rack of baby-back ribs plate with two sides is the standout ($14; $22 for a full rack). Coated first with a sweet and peppery rub, the ribs are smoked long enough for them to almost fall off the bone. The sides I chose were a tart and crunchy coleslaw and a leaden biscuit that had clearly been made several hours before and tossed in the microwave before it came out. I rued my decision to skip the garlic-and-parmesan fries.

My husband ordered the pulled-chicken plate ($14). It came with thinly cut fries and the standout Vince’s Texas-style chili, which unexpectedly stole the show. The chicken under the sweet and smoky housemade barbeque sauce was a bit watery (crisp fries were ideal for soaking the liquid up), but it was tasty, and the portion was generous. What with the satisfying chili, which had a barbeque sauce/chipotle bite, and the huge pile of chicken and fries, my husband couldn’t finish his plate.

After deliberating for several minutes, our little boy vetoed the kids’ meal of a hotdog and instead went for the half pulled-chicken sandwich with beer-battered onion rings (a bargain at $7; full sandwich is $10). Given the size of my husband’s plate, it’s nice that Bailey’s offers a half sandwich. The pulled chicken comes mounded on a fresh roll. My husband and I suggested that our son get the barbeque sauce on the side, since it has a spicy kick. Our normally selective meat-eater dolloped on a bit of sauce, then launched carefully into his sloppy sandwich, almost overlooking the giant onion rings that sat alongside it. These had been made with what looked and tasted like stout or porter swirled into the batter. The rings had a rich sweetness and an excellent crunch. 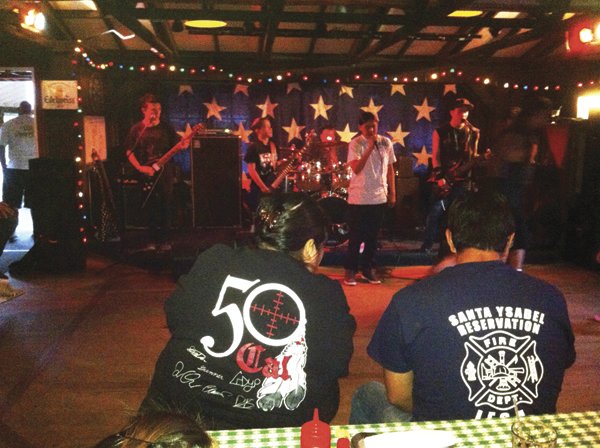 Neither my husband nor I could bear the thought of dessert, but our son begged for pie, an obsession of his. We opted to get a piece of Annie Bailey’s apple pie to go, so we could amble next door to the saloon for one more beer and a peek at the featured early band. This was a show that welcomed kids into the saloon, which after about 8:00 p.m. is 21 and up only. We shared a picnic table with another fellow and ordered a Port Mongo double IPA and a Russian River Blind Pig IPA (we almost always go for the hops, which is why the San Diego craft-brewing phenomenon has been so appealing) and settled in to watch the show.

We were immediately hit with Pink Floyd’s “The Wall.” As our eyes adjusted to the dim lighting, we realized that all the members of 50 Cal, the band that night, were teenagers — between the ages of 12 and maybe 16. It turns out that these are kids from local reservations, Santa Ysabel and Barona, and they play fundraisers and graduation dances. Even though hard rock is not my music of choice, I couldn’t help but be charmed by their earnestness and the fact that their extended families, including toddlers, were in the audience, singing along and dancing to Deep Purple and Slayer.

As we sipped our IPAs and our son gobbled his pie, we felt enveloped in family and food and toasted to a lovely Father’s Day.

Neighborhood: Julian and the mountains

Seating: Eight tables outside on porch and side yard; ten tables inside