But I Did Eat at a Holiday Inn This Morning 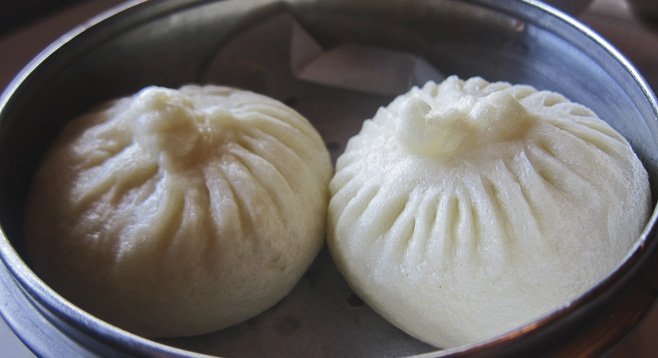 Sorry to take some license with the popular advertising slogan, but odd as it seems, we’ve been eating at the Holiday Inn off Miramar Road for over six years. When I was first told about Chin’s, which is inside the hotel, I had my doubts, and so did my wife. We’d eaten at some of the chain’s other locations and had never been that impressed. But I wanted to try something served here that my wife calls “Chinese breakfast.”

She was born in the city of Qingdao, Shandong Province, China, where Chinese breakfast was zhou — rice porridge, also known as congee or jook (soy milk being another breakfast staple) — but the most familiar modern interpretation of Chinese breakfast is probably Hu Cai (Shanghainese cuisine). Historically, within the eight schools of Chinese cuisine, Shanghai is not recognized as having its own specific style. The cosmopolitan city has instead adopted dishes from other regions and modified them. Folks there would probably call these modified recipes a combination of Su Cai (Jiangsu cuisine) and Zhe Cai (Zhejiang cuisine). Perhaps I can avoid the wrath of folks who will now want my head by diplomatically terming this Jiangnan, or “South of the Yangtze” cuisine, just as my coworker from Shanghai, Yuerong, does.

During my first visit to Chin’s, in 2006, I was confused by the decor. Here was the ubiquitous Chinese rosewood furniture, but the cold case that held pathetic-looking cakes, along with a corporate-style salad bar that had been converted to a cludgy wine rack, pointed to a former incarnation. Perhaps the strategically placed gong signaled what type of restaurant this was? 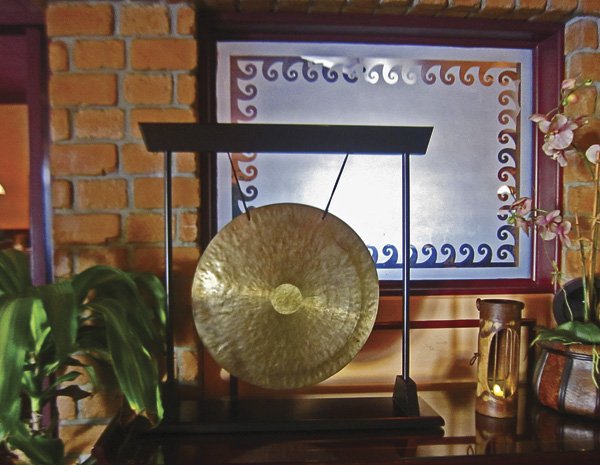 Who'd have guessed that there was good Chinese food at the Miramar Holiday Inn?

Since then, much has changed. The Saturday and Sunday morning hours have expanded; they now open at 9:30 a.m. The menu, initially written in Chinese only, first morphed into an oddly translated version — “Mr Wong’s Flower Bun,” anyone? — then into its current form, which offers photos and straightforward translations. The “Jiaxing Braised Duck” is simply “Braised Duck.” “Zhejiang Style Pork” has become “Cured Pork Cubes.” I do miss the thrill of selecting dishes without the Missus on hand — minus her translations, I was never sure of what I’d get — but ordering is now a snap.

Some of my favorite items at Chin’s Miramar are the liangcai (cold dishes). Many of these fit the flavor profile of the region: “sweet, salty, and red-cooked.” The Five Spice Beef, thin slices of cold beef stacked on a small plate, though a little grayish, is brushed with a sweet and salty glaze. The beef is usually tender. It’s a favorite of most of the folks I take to Chin’s, as is the glazed duck.

My mother-in-law, Hui Lin, likes the Xun Yu, Southern Smoked Fish. It isn’t actually smoked, but marinated, deep fried, and marinated again until it attains a deep, dark color, which make it look liked smoked fish. Served cold, bony, and strong in flavor, it is an acquired taste — Hui Lin calls it a “taste of China.” We always get a couple of orders when she visits us.

Cured pork cubes are another favorite. On other menus, these are often called “jellied pork” and “pork aspic.” The dish looks like head cheese, but it’s pork leg that’s been simmered and chopped, then topped with a layer of aspic made from pork hocks and skin. It’s mild in flavor, served with black vinegar.

The mushroom bun is stuffed with mushrooms and greens. The dough for the baozi is on the gummy side, but the filling has a savory, mildly bitter/sweet flavor. Five Spice Beef is served in a baked bread called shaobing. My friend @HannahJ (that’s her Twitter handle) once called it the best breakfast sandwich she’d ever had.

I’ve spoken to a few people who like the youtiao, the fried dough/Chinese donut/fried cruller that is another Chinese breakfast staple. I find the version at Chin’s hard and heavy and a tad greasy. But to put this into perspective: I’ve never found a youtiao in the U.S. that I’ve enjoyed. It makes me think that there’s a secret ingredient — perhaps harmful to lab animals — that makes the fried dough so light and crisp in China. 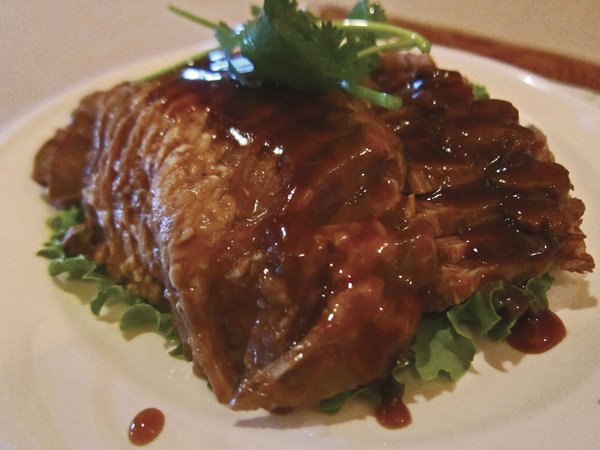 The youtiao fares better in the version of jiangbing guozi that Chin’s serves. In many Chinese cities, you find street vendors making crêpes. The vendor cracks an egg on the crêpe, and when both are cooked, a sauce is smeared over the top and scallions are added. The crêpe is rolled burrito-style around fried dough. Eating a steaming jianbing is one of my wife’s cherished memories from her high school and college days in Beijing. At Chin’s, they serve a heavier, greasier version of this street staple. Another popular Chinese dish, the beef roll niu rou juan bing, is also heavier here.

As for the rest of the menu…the noodle soups are a mixed bag. The broth tempers the sweetness of the wuxi sparerib, but in the niu rou mian (beef noodle soup), it’s bland. The noodles aren’t to my liking, either, being too mushy to have that nice doughy pull.

My wife and mother in-law are from Shandong, and I’ve been indoctrinated with the “Tao” of jiaozi (dumplings). We’ve found that both the regular dumplings and the xiao long bao — most commonly called “soup dumplings” — fall short. The wrappers are brittle, the dumplings leak soup, and the fillings are bland.

The menu is large enough to keep me writing for another thousand words, but perhaps this short take will encourage you to give the place a try for breakfast. Try a stir-fried nian gao (sliced rice cake) dish while you’re at it. A word of warning: several of Chin’s locations serve this type of breakfast on weekends, but we’ve found the Miramar location to be the most consistent and also to have the widest range of choices. The Missus and I have been depressed lately at the state of Chinese cuisine in San Diego. Restaurants have closed, changed chefs or owners, and maybe grown stale, so we’ve reverted to our old habit of driving around the San Gabriel Valley. Chin’s weekend breakfast is an exception.

It is with sadness that I note that local food writer and friend Candice Woo and I had long tried to lure the Reader’s intrepid restaurant reviewer, the late Naomi Wise, to Chin’s. But Naomi was not an early riser. How great would it have been to read her thoughts on dining at a Holiday Inn?