One Wolf Returns to Julian 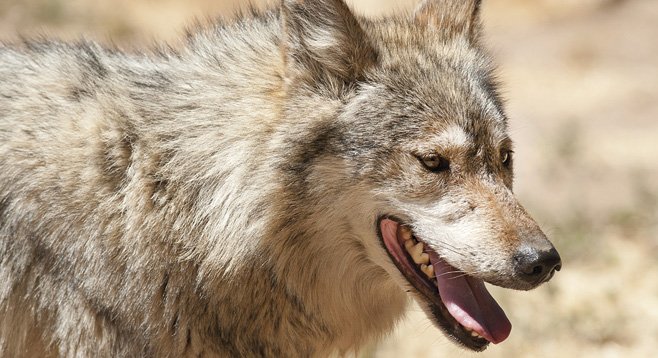 Four miles outside Julian, off KQ Ranch Road, a wooden notice board displays the words “California Wolf Center. Wait here for escort.” Beyond the signboard three quarters of a mile, up a rutted dirt road, a locked gate bears a second notice, warning trespassers they may be prosecuted for harassing a federally protected species.

After the menace conjured by these signs, the mountain lodge where the center is based seems mundane. The 3000-square-foot building houses an office for three full-time employees, living quarters for an on-site caretaker, and a conference room and gift shop. It’s here that 7500 to 10,000 visitors per year listen to lectures and play wolf bingo or make wolf masks, activities designed to teach them about wolves, biodiversity, and the role of predators in an ecosystem.

The rest of the captive breeding facility is 50 acres on two parcels of land, where 19 gray wolves — Canis lupus — live in five separate packs. Four of the packs are Mexican wolves, a subspecies that is bred for release, part of a Species Survival Plan sponsored by the Association of Zoos and Aquariums. The Mexican wolf is one of the rarest land mammals on Earth; in 2010, only 50 lived wild in the United States, according to the U.S. Fish and Wildlife Service. The fifth pack is Alaskan wolf, here for educational and research purposes. 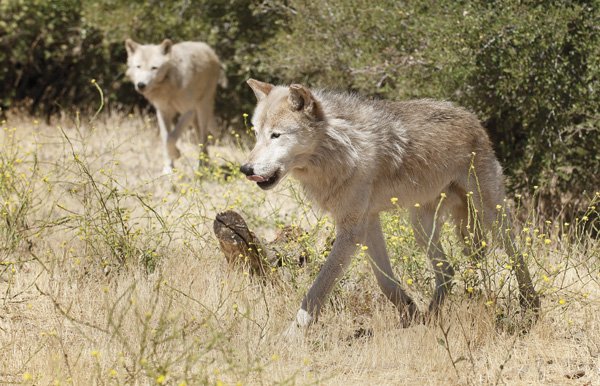 A pair of Alaskan wolves roam through their enclosure.

The center’s research has included a vocalization study on how wolves communicate with each other, dominance-hierarchy studies, and a conditioned taste-aversion study, which researchers hope to apply in the wild to protect predators from potential conflict with livestock production.

A couple of months ago, I had little interest in wolves and had never heard of the California Wolf Center. But after a conversation with Amaroq Weiss, I drove to Julian to see these animals for myself.

Five minutes into what would be the first of several hour-long phone conversations with Weiss, I began to think of her as the Wolf Lady. Weiss is a self-proclaimed “canine fanatic” and “champion of things people don’t like.” When I inquired about her background and how she became the Northern California representative for the California Wolf Center, she replied, “Like a wolf, I’m a generalist. Like a wolf, I’m curious,” before saying that she has degrees in entomology and law.

I’d called the center to ask about a wolf in Northern California named OR7 (or, more recently, Journey), who keeps popping up in the news, and Weiss took us back to ancient times, when some two million or so wolves roamed the United States, including most of California.

She cited the work of a bushily bearded publisher/editor — founder of Heyday books — out of Berkeley named Malcolm Margolin, who in 2001 wrote a paper on evidence of wolves in California.

“[According to Margolin’s paper], when Europeans arrived here, there were more than 80 distinct native languages spoken in California,” Weiss said. Almost every language had a word for “wolf.”

By the 1920s, a federally sanctioned predator-eradication program had wiped out all but a handful of wolves in the lower 48, leaving exactly zero in California. 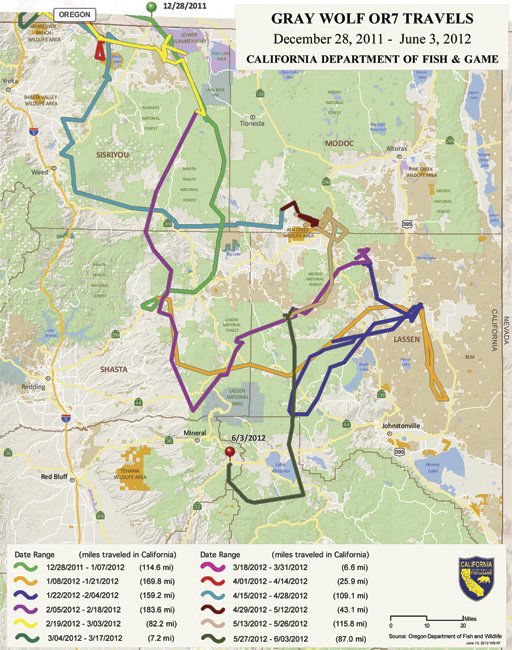 This map shows the travels of “Journey,” the gray wolf who entered California in December — the first known wild wolf in California since the 1920s.

Fast-forward to the 1973 Endangered Species Act, which in 1974 landed the gray wolf on the Fish and Wildlife Service’s list of endangered (and, therefore, federally protected) animals in the lower 48 states. In later years, as states created their own lists, the gray wolf ended up on lists when a state (such as Oregon) grandfathered in native federally protected species. But California created its list “from scratch,” Weiss tells me, and because it had no population of wolves to protect, the gray wolf didn’t make the cut.

Then, last year, on December 28, a 2½-year-old wolf named OR7 (the seventh wolf radio-collared in Oregon) crossed our northern border and became the first known wild wolf in the state of California in 87 years. As of July 3, he was still wandering through California, the satellite showing him to be in Butte County.

On February 27, four conservation groups petitioned the California Fish and Game Commission to add the gray wolf to the state’s endangered species list. This, according to Weiss, is necessary for two reasons.

“One, there’s always the possibility that the federal government could decide to remove federal endangered species protections for the wolf, in which case there would be no safety net,” she said. Last December, the Obama administration announced that gray wolves in Michigan, Minnesota, and Wisconsin would be delisted. The second reason is that it would give the state’s Fish and Game Department its own “conservation obligations, apart from whatever the federal government is doing.”

Thanks to my many conversations with Weiss, by the time I drive to Julian and am escorted up the dirt road and through the locked gate by Erin Hunt, the California Wolf Center’s general manager, I’m armed with as much information as a fledgling wolf girl can hold. But none of that information prepares me for the jolt I experience a half hour later when I catch sight of two wolves not three feet from where I stand. 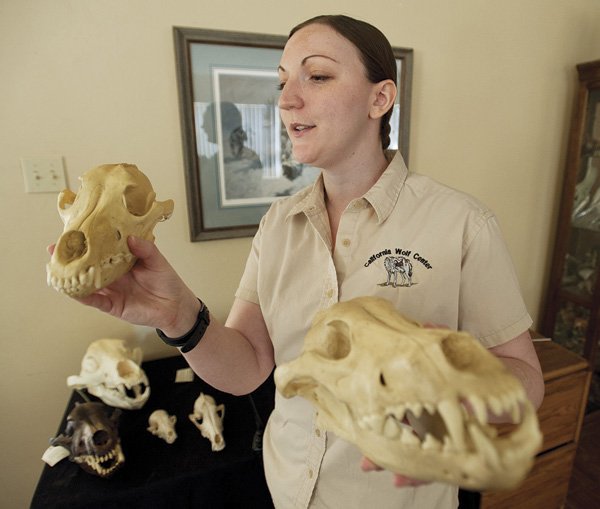 Erin Hunt, director of the California Wolf Center in Julian, shows a couple of wolf skulls.

They’re behind a ten-foot fence with a four-foot overhang and four feet of ground wire beneath, and the encounter is brief. But when the two females emerge from the undergrowth to show their red-brown faces, I inhale sharply at what I can only describe as their wildness. It’s frightening, and yet, once they disappear, I want them to come back. In this moment, I understand both the fear that provokes antiwolf sentiment and the passion that could drive a highly educated woman to obsession.

Two weeks later, when I call Weiss to tell her about this experience, she laughs and says, “I love to see the wolves. But even more than that, I love to see other people see the wolves for the first time. The look on their faces is magical.” ■

Wow. I remember going to the Wolf reserve as a kid. I really enjoyed it. Auto Detail