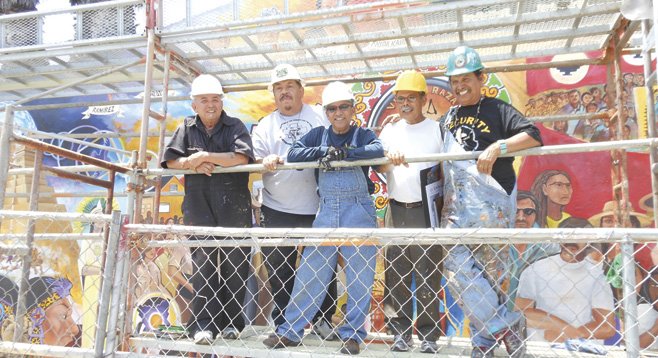 Armando Nuñez is touching up a skeleton. “That first day,” he says, “I brought a half-gallon can of green bathroom paint. Everybody brought whatever they had. That’s how it was. We didn’t plan. We just started painting.”

He and I are standing amid blue scaffolding beside the wall of an I-5 ramp to the San Diego–Coronado Bridge on the last day of the repaint of this Chicano Park mural. This panel is where it all began, back in 1973, when Nuñez and other young Chicano artists started creating the first of 72 murals that have been painted on ramps and pillars under the bridge. Today they make up the largest collection of outdoor murals in the United States.

And after nearly 40 years, five of the original artists have come back to repaint this mural. 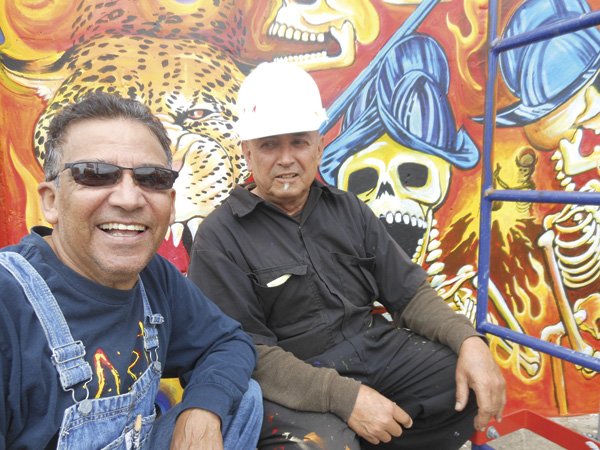 “We were just a bunch of young artists, angry young men looking to establish our own identity,” Nuñez says.

That outburst of revolution-by-art didn’t happen in isolation. Barrio Logan had been mauled, first when the City relaxed zoning rules and allowed junkyards and metal shops to move in next to houses, and then when the state destroyed over 5000 barrio homes and businesses to make way for Interstate 5.

The final straw came on April 22, 1970. That day, a City College student named Mario Solis noticed bulldozers parked right next to the area the City had promised to turn into Barrio Logan’s first park. Instead, a California Highway Patrol station and parking lot were about to occupy the spot.

Solis ran through the barrio telling his neighbors. Soon they were forming human chains around the bulldozers. He told his professor of Chicano Studies, Gil Robledo. Robledo printed flyers. The word spread. Some started creating a park themselves. They planted cactus, flowers, trees.

But the pivotal moment came the next day, when Salvador Torres, an artist, said, “Hey, why don’t we cover the pillars supporting the freeway and bridge with beautiful paintings representing who we are?”

Torres is now called “the architect of the dream.”

But, then, three years passed. “I was 22,” says Nuñez. “Not much had happened. We needed to fight back more, start something meaningful. Somebody said, ‘It’s the third anniversary. Let’s just go and start painting.’”

Guillermo Aranda, the guy in his 60s repainting a ten-foot pyramid next to the skeletons, says he was instrumental in making this happen. Maybe 200 to 300 people turned up. “We just decided to go down, find a pillar, and start drawing, painting,” he says. “Some of us were good, others not so. Some just scrawled angry statements. I remember José Gómez, who had been a leader in the original 1970 takeover of the park, came down and he was mad. ‘You messed it up!’ he said. I said, ‘We’re just beginning.’ And I realized then, I had made a commitment. A big commitment.”

How did they decide what to paint? Aranda stands in front of one of the first scenes he painted. It depicts skeletons wearing Spanish helmets, one skeleton-soldier roasting a baby in the fires of a volcano, next to a jaguar, Tezcatlipoca, Lord of Darkness. Near that is the Great Pyramid of Cholula, where Cortés and his Tlaxcalan allies massacred 3000 Cholula citizens and burned the city in October 1519.

“This is history,” says Aranda.

Are all these beautiful, bright images basically angry protest paintings? 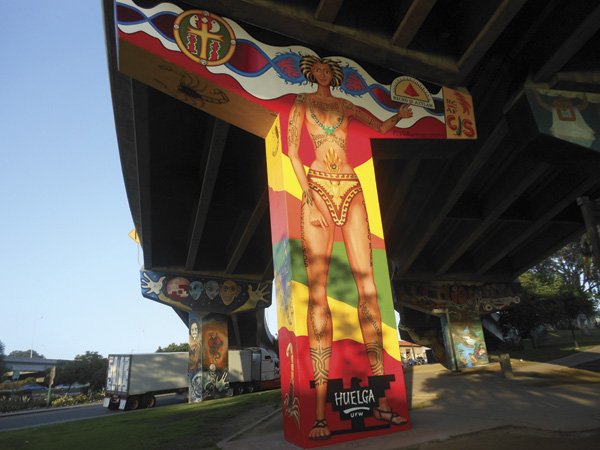 “No,” he says. “I realize now, more and more, these are paintings of love. This repainting has been an incredible experience. It brings back the excitement and fear we had to conquer, to go through what we went through, challenging the authorities. But anger? After the first two or three years, I realized that anger was what had driven me. When I was 18, I went to jail for stealing tires. When I got out, I realized I needed to make a break. So I joined the Air Force. It opened doors to the bigger world but also to a harsh racism I’d never felt before.

“So I was still angry when this happened. But, eventually, you start to feel the effects of anger on your psyche. I didn’t want that. I realized I still had to act, to fight for Chicano culture and respect, but as an act of love.”

“Young Chicano people? They know nothing,” he says. “They’re not interested in how they came to be. Technology gives them a detachment. Their only real relationships are with their friends online, which makes me more determined to preserve and document all this.”

Five of the seven friends who started this painting 40 years ago are here today. They and others are working on 18 of the 72 murals that most need restoring. Caltrans, once the enemy, has shepherded the $1.6 million state grant to pay for the restoration costs.

For that, everybody here is quick to credit Caltrans’ Martin D. Rosen. According to Guillermo Aranda, it’s only because Rosen wrote the grant back in 1999 and then stayed on the project until the money finally became available in 2011 that this $1.6 million restoration has been possible.

The guys line up along the scaffolding for a group photo. It’s about 11:00 in the morning, getting hot. Salvador Barajas is telling me about the technical manual for the restoration of the murals that he helped compile when a young Anglo guy wearing a construction helmet comes up, tentatively. Nathan Bellamy. He’s working on the nearby Mercado shopping center and apartments.

“Was wondering if I could help you guys with your painting?” he says. “I do airbrush art.”

Barajas is taken aback for a moment. Then he says, “Sure. Of course. Uh, first you’ll have to find out about us, our story, our history, if you want to help tell it. But, hey, welcome. There are plenty of pylons left to paint.” ■

Great to hear so many of the original creators are working to preserve these amazing murals! Stuff like this makes me proud to be San Diegan!

I'm wondering if the tour buses go by these murals. They have become integral to the city.