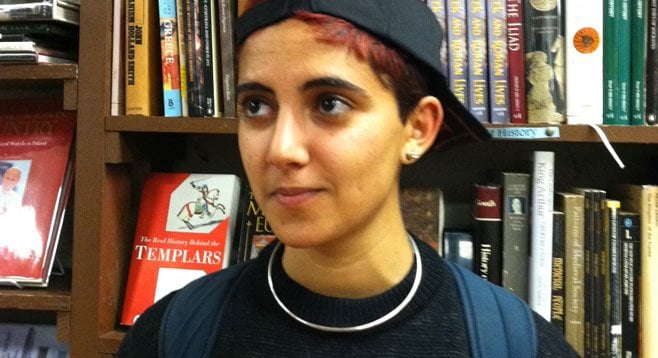 “Timequake, by Kurt Vonnegut. I love him; I’ve been binging on his books lately. In this one, there’s a ripple in time in 2001 that sends everybody back to 1991 to relive those years. For the most part, he focuses on what happens after the Timequake, which is the name he gives to the ripple, and how everybody kind of doesn’t notice that it’s over. All of a sudden they have free will again — during the ten-year period, they had no control over their lives, and just had to relive everything exactly as it happened before. Now, after ten years, they have to do things on their own. But they don’t notice when it’s over. People fall down in the streets because they don’t know they have to be controlling their limbs. Pilots crash their planes into mountains, because they don’t know that they’re actually flying the planes again.”

Who is your favorite character?

“Kurt Vonnegut himself is a character, as well as his alter-ego, whose name is Kilgore Trout. He’s a science-fiction writer, a lowlife science-fiction writer who’s never gotten famous or had anything published. He just writes consistently; he writes stories all the time. In this story, he’s living in a homeless shelter, and he throws his stories in a wire basket outside of one of the museums near the shelter.”

What do you think he’s doing with the book?

“In every one of his books, Vonnegut talks about humanity, and how we rely so heavily on not really focusing. How we’re so involved in droning out, you know? Like, our minds are controlled by the media, by TV. He abhors TV, and he talks a lot about that.”

Tell me about the style.

Who is your favorite author?

“Vonnegut is one of them, for sure, because he’s just wacky and really funny and really intelligent. Another of my favorites is Ed Abbey; he writes a lot about adventure and the outdoors — adventure novels. The last one I read was The Fool’s Progress, but he’s most famous for The Monkey Wrench Gang.”

“Honestly, every book I read changes my life a tiny bit. Every one of Vonnegut’s books makes me think about the way time progresses...whether it really does progress or whether we can just live in any moment that we want to live in.”

Do you talk to your friends about books?

“Oh, yeah — I talk to my best friend Angel the most, probably. We have a lot of similar interests. I had Party Monster, which is a true crime book about these club kids from the ‘80s, and he borrowed it and read it first, and I read it right after him, and we had a conversation about one of the crazy stories in it.”

Do you read any newspapers or magazines?

“Sometimes I skim through Vogue or other fashion magazines. And I read a lot of rock-climbing magazines right through.”