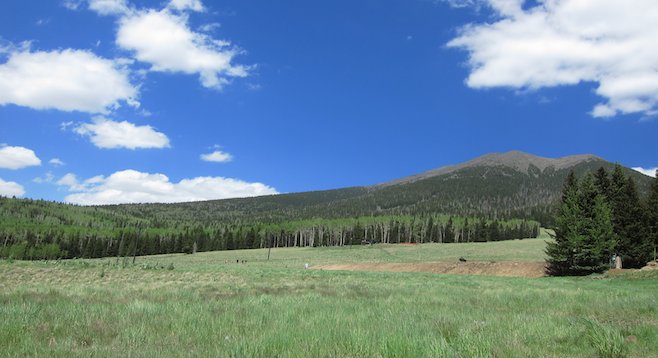 Standing still is impossible. 70 mile-an-hour gales force me to stumble forward at a precarious 75° angle. The frigid gusts are uneven, causing my feet to boogie an awkward three-step on the summit’s razor-sharp rock slopes. Tears cloud my vision as I stagger around a few hikers laid spread-eagle on the trail, resting from their battle against the airstream's bluster.

The last 200 feet of elevation gain seem to require an eternity to complete, but I push myself forward against the squall. At the top, I immediately collapse under a rock wall made by previous groups of windblown trekkers. Made it! I unbuckle my hydration pack, gobble a peanut butter Cliff bar, and contemplate the apex of Arizona’s tallest mountain: Humphrey’s Peak.

Icy temperatures. Ruthless wind speeds. Beds of knife-like obsidian. From the trailhead, I am completely deceived about the summit’s afternoon conditions. It’s 8 a.m., and the light morning fog is dissipating in the fresh, pine-scented breezes. From the gravel parking lot, an Arizona Snowbowl ski run cuts deep into the forest.

It’s June, so the slope is a jumble of rainbow flowers and mountain meadow grasses; the scene is only interrupted by a lone dormant ski lift. The sun is out, and a few puffy cumulus clouds hang on the horizon. The weather looks optimal for a brisk, 10-mile roundtrip day hike.

Starting from an altitude of almost 9,000 feet, the first two or so miles of the hike lead through an unexpectedly dense Lodgepole Pine and quaking aspen forest. The tangled thickets are interrupted by large strands of fallen logs, and the trail is cut by trickling streams and muddy puddles. Bird songs and woodpeckers’ hammering echo through the trees while a solitary white-tailed deer flounces past. To reach the 12,637-foot peak in under five miles, the path’s incline sharpens immediately. I set an ambitious uphill pace.

Humphrey’s Peak conspicuously rises over a thousand feet higher than the rest of Arizona’s San Francisco range. An underground pool of magma created the San Francisco Peaks as it punched a series of volcano mounds into the earth’s rotating crust. The chain’s last eruption occurred almost 1,000 ago at neighboring Sunset Crater (now closed to hikers).

Native Hopi, Zuni and Navajo peoples still incorporate stories about fire gods coming from the ground into their national histories. The San Franciscos rise from northern Arizona’s high-altitude, but rather flat Coconino Plateau, and are clearly visible from as far away as the North Rim of the Grand Canyon over one hundred miles distant.

Five hundred years ago, this area was a settlement hotbed for native peoples, and I’ve already visited nearby Wupatki and Walnut Canyon National Monuments to ogle at the striking cliff dwellings and pueblos of long-gone civilizations.

Two days ago, I also stopped by Sunset Crater National Monument to climb O’Leary Peak. At 8,916 feet, O’Leary’s enticing views of Humphrey convinced me to extend this leg of the trip for at least one more day.

Back on the trail, the forest suddenly thins, and I begin to spot patches of open ground above and below me: the tree line is near. Mounds of melting snow appear as stands of Ponderosa pines give way to the beautifully gnarled bristlecone pines, which date to over 3,000 years old.

So far, the trail has avoided the monotonous routine of switchbacks and leads circuitously around a few mountains towards Humphrey’s ridgeline. I can see a saddle a mile or so above me and guess that Humphrey rises somewhere behind it. The trail consistently maintains its steady uphill gradient, and I pause to take a brief water and snack break. “Three uphill miles in 45 minutes?” I think to myself. “Not bad.”

As I pass a fellow hiker, he glances at my Neeko hydration pack and thoughtfully murmurs, “That’s nice.” I slow down and grin. “Yup.” He seems skeptical. “But does it have enough room for everything you need?”

While living in China a year ago, I discovered this fanny pack-esque waist pack with dual water-bottle pouches and a padded two-liter compartment for hiking sundries resting on the back. It is NOT a fanny pack: fanny packs are uncool accessories for short shorts–wearing dads and tourists. I prefer REI.com’s more ostentatious descriptor, “lumbar hydration pack.” Not to mention that getting the weight off my back while hiking keeps my back cool, reduces sweat and takes the load off my twisted scoliosis spine.

“It definitely doesn’t carry everything – but that forces me to only carry along the things I absolutely need.” The hiker is unconvinced and continues down the trail.

On this hike, I’ve filled the pack completely with just my pants’ zip-on legs, a thin Columbia fleece, a few snacks, and my Canon S95 camera. Disappointed that my enthusiasm didn't convince the hiker to buy his own Neeko, I plant my Black Diamond trekking poles and turn upwards.

Trudging forward, I enjoy the sprawling vistas now that the forest is a mile behind me. Coconino National Forest spreads in all directions. At this elevation, the drier sagebrush plains are visible off in the distance as well. I reach the saddle, and the wind picks up significantly. Dry Arizona air rises upwards during the day when hot, high-desert gases are sucked up mountain slopes by the range’s colder, high-elevation atmosphere. I don the rest of my clothing layers and face the wind up the ascent’s final mile.

The trail at this point cuts into deep rock beds, and I am easily disoriented. Face against the glacial cold, I lose the trail.

Instead of turning downhill and retracing my steps, I look up towards where I think the summit is and chart an overland course of my own. The going is slow, and I avoid tramping over the many tundra-like beds of San Francisco Peaks groundsel, an endangered flower that grows nowhere else in the world.

Several false summits tease my energy. I imagine I look like a half-crazed goon stumbling solo among the rocks, but I climb higher and higher and eventually relocate the trail in time for the final push.

At the top, I huddle against the stony lean-to and gaze at northern Arizona’s diverse, spreading landscape. The Coconino Plateau can be seen for hundreds of miles on all sides, and the Grand Canyon's deep gash into the earth is plainly visible 40 miles north. Incredible!

The air is arctic, and I don’t stay for long: long enough only for a gracious stranger to stand up against the wind and take my picture. Bunched up in a ball, I take a moment to appreciate the achievement.

That's a nice piece of writing, Daniel. Well crafted descriptive sentences, and the imagery is superb. I could almost smell the pines. Keep your water fresh and your hiking boots dusty. I look forward to your next forty-seven.