“We were riding the bayside bike track and came across it.” 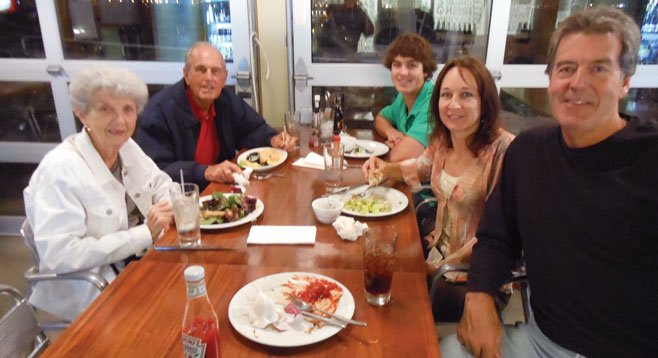 If I’d known then what I know now, I might have stuck to life east of the I-5.

I swear, what a hike. I get off the Blue Line trolley at 24th Street, National City. Pretty much dark already, around 6:00 p.m. I head south to Mile of Cars Way, turn right, head west, dive under the trolley, and then under the I-5, and come out into a different country, feels like.

There are a couple of buildings on the left, like a new Best Western motel and an ancient railroad depot. Oh, yeah, I remember now. This is the National City Depot. Where the transcontinental railroad was supposed to end. It’s been here since...what, 1882?

Whatever, today, we’ve got Best Western, the Depot, and then…nothing.

Now I’m hiking south down this lonely road called Marina Way. Gloomy. Complete silence except for crickets. Bushes seem to be climbing over the fence, reaching out to grab you.

Must’ve walked a mile, almost, and then, ’round a bend, the next thing I see is…Tijuana! You come to the end of the road, and the beginning of the water, and there’s this blaze of lights, shimmering like spilled diamonds: TJ, on the near horizon.

I pass a sculptured skeleton of a boat, and then decks with tables and chairs and a little artificial white-sand beach with half a dozen Adirondack chairs facing the bay. This would be so cool on a sunny day.

By now I can make out the marina. Hundreds of boats, some pretty flashy, some looking like they’ve traveled hard.

I walk along a frontage with taut canvas awnings and white umbrellas folded for the night. Upstairs on the deck of the marina building, I spot this lady grilling chicken and potatoes on a BBQ. Name’s Kimberly. Turns out she lives on a boat that’s moored in this marina. Has just sailed around…the world! With her husband. Is cooking their meal on a grill provided by the marina. She says a lot of folks live aboard here.

She points me to a door. “Open,” it reads. A moment later, I’m in the warmth of the — whew! — Waterfront Grill.

I flop back in a chair and check the menu. Hey hey! Derreck, the guy in charge, says it’s still happy hour. Main deals I see are $2 domestic beers and $2 fish tacos. I order a beer and a taco, just to get going, and cast my eye over the menu he passes me.

Hmm… Non-happy-hour chow is a little more up there. Fish is a big deal. Like, even in the appetizer section, the lobster taquitos cost $8.50, sesame-smeared ahi is $9.95, and three Angus beef sliders go for $9.95. In the serious-entrée section, grilled swordfish is $19.95. The flat-iron steak with baked potato and veggies costs $18.95.

A five-strong, three-generation family at the next table says this is their first time here. “We were riding the bayside bike track and came across it,” says David Owens, the dad. 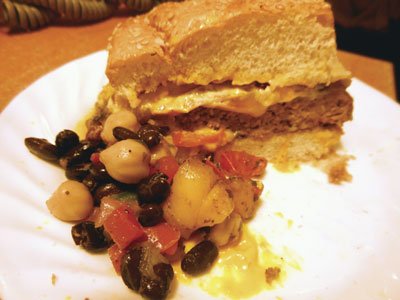 I down my fish taco (delish, crispy), glug my MGD, then have another fish taco. Heck, two bucks, who’s counting?

Then, just when I could walk away only seven bucks poorer, I decide I have to order their beef burger to go, for ten, eleven more. For Carla. Also, I’m curious, because it sounds delish: half-pound patty, with roasted garlic aioli, red-leaf lettuce, tomato, onion fritters, and blue cheese (I could have gotten smoked gouda, mozzarella, or pepper jack). It comes with a side of garlic fries or salad — bean salad, potato salad, or coleslaw. For no particular reason, I go for the bean salad.

I hate to leave, actually. I’d love to come back at sunset, drink some Green Flash (which they have), and watch for the green flashes.

Meanwhile, all I’ve got to do is make that long walk back.

P.S. The burger is a major hit with Carla. And for the chunk she gives me, it’s not just good because of the huge patty and ladlings of blue cheese, but because of that bean salad. Man, was that ever an unconscious master stroke. Black beans, garbanzos, red and green chili-pepper chunks, tomato, and pineapple. On impulse, I stuff it all into the burger and, presto: the luscious, tart and tasty National City Boiger is born! ■

Nearest Bus Stop: 24th Street trolley at Wilson and 24th Street (aka Mile of Cars Way). Warning: walk to restaurant is about three quarters of a mile