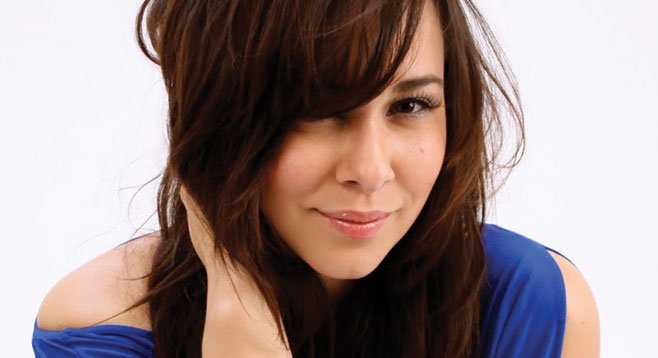 “I had to wait for my contract to expire with [TV talent show] Platinum Hit, but my sophomore album Space.Bar.Love is finally being released,” says singer/songwriter Amber Ojeda. Though she didn’t win the Bravo network competition, she says, “The show was a crazy whirlwind. I learned a lot, I grew a lot, and I also realized how important it is to speak my mind if I don’t believe in the integrity of a song. I could have used a lot more sleep, a little more wine, and a stronger stomach for people being rude to each other.”

No stranger to TV — she played a recurring role in the locally shot series Veronica Mars — Ojeda has an opinion as to why some televised competitions succeed while so many others fail. “I think the bottom line for TV reality shows is that people want to be involved. The shows that achieve great success are due to the fact that people love to feel responsible for the artists’ success.”

The former San Diego Gulls Girl released the first single from Space.Bar.Love, “Galactic Love,” last summer, but her deal with Platinum Hit precluded releasing the full-length until the end of the year. “As far as the album title goes, I really pondered what would represent this eclectic body of work. Space references my fascination with the sky. Bar has a double meaning, the obvious one and the space bar on a computer keyboard. There’s a song on the album called “F13” that depicts a broken relationship and the desperation toward trying to connect with someone, even if it may only be through social media. Love, of course, represents the driving force behind everything.”

The full-length is a digital-only release. “I’ve always leaned toward releasing music via the internet. As a consumer, I rarely purchase hard-copy music, and I haven’t for years, unless it’s a limited compilation or something. It has nothing to do with cost or sales dropping. I simply feel that streaming music and online sales are the future of the industry....

“The only reason I released my last album, Here I Am, as a hard copy in Japan is because my label there, Sweet Soul Records, still has a strong record-store presence.” Space.Bar.Love goes on sale this week via major online music retailers, with a streaming version available for preview on Spotify.