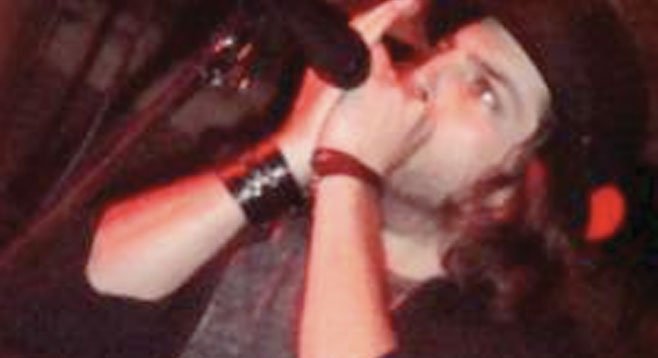 Yes! This Lifetime Christmas movie has all the best elements of cheese that one expects on xmas eve.

You guys are never gonna believe where I am. #Melrose Mass (@St Brigid’s Catholic Church)

Now this is the kind of midnight mass I can get into. It’s at capacity at the moment, FYI. (@The Casbah w/@thenaj)

I was pretty late to the Nada Surf party. I never particularly cared for the song “Popular” and didn’t realize the amazing music they made until it was pointed out to me by an ex-boyfriend. We’d stay up till sunrise listening to albums like The Weight Is A Gift and Let Go, then delve into the older stuff like High/Low and The Proximity Effect. That guy is long since out of my life, but the band is still one of my favorites and I’m pretty sure that I’ve been to every show they’ve played here in the last seven years or so.

Monday, (11/28) I went on a date (!!!) which involved dinner at Lucha Libre, The Muppets movie, video games at Dave & Buster’s, and late night wine and a brutal game of Scrabble. Super awesome. The boy is super cool and will be completely mortified that I’m writing about it.

The next day was the Slacker party with Fitz & The Tantrums. Jeff and I had dinner at Bar Basic. Fearing a crowd, he left. I stayed at the party, which was awesome. Free food, open bar, one of my favorite bands around, and a completely disappointing crowd. Over 5000 people RSVPed to the party and there were maybe 300 people there. Perfect for people like me who get claustrophobic, but it seriously made me second guess this town...what else can they give you for free to get you off your couches?

Thursday was an awesome day. I had lunch with Michael McGraw and we ended up picking up a TV at the thrift store for twelve bucks so I don’t have to deal with my dead picture on my TV anymore...

Today was punctuated by an Internet troll talking shit on Twitter and to you, little troll, I hope you get a life. I love social media and know that my life and my work are very public and thus subject to criticism, but when stalkers and trolls hang around, sometimes it makes me rethink living out loud.

I have to admit, I was slightly nervous about seeing The Pheromones at 710 Beach Club. It was their CD release party and it was my first time ever at the bar. There’s a whole comfort zone thing that happens when you go to the same places over and over; you become accustomed to door guys giving a hug instead of inspecting I.D., you get used to bartenders knowing your drink and actually being friendly. I don’t like to leave the comfort zone very often.

The other part is that I met Craig, bassist for the Pheromones, a while back when Jake invited him to my house for a little after hours hanging out. We went to the G.O.P. show at the Beauty Bar together and he gave me an advance of The Pheromones CD…

Since it was my first time at 710, the first thing I had to do was assess drink prices and then the stage and lighting. A Corona & shot of Cazadores was $13. youch.

One thing can be said, whatever 710 is doing, they know their crowd. These are people who want to rock out, drink heavily, and dance to a live band. And that they did…

As for The Pheromones, the boys know how to bring it and oh, was it broughten. I was taking pictures, but between constantly flashing lights, getting pushed by Hollywood Tan spokesmodels, and having beers splashed all over me, these were the best I could do…