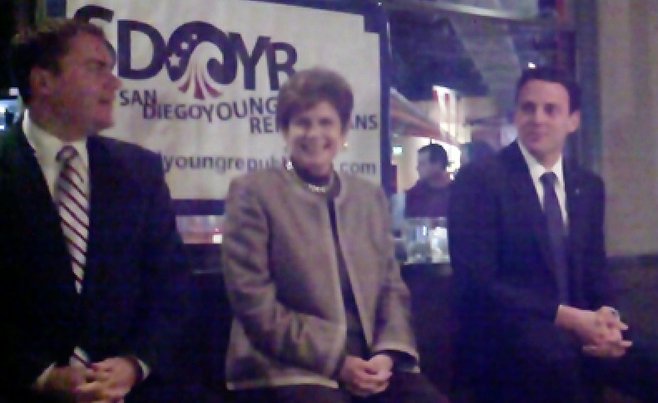 The San Diego Young Republicans hosted a mayoral debate at Randy Jones All American Grill in Mission Valley on February 27. Republican candidates Carl DeMaio, Bonnie Dumanis, and Nathan Fletcher were in attendance (Democrat Bob Filner, another prominent candidate, was not). Mike Slater of 760 KFMB AM served as moderator.

The evening’s most entertaining exchange took place when Slater — citing Fletcher’s endorsements from two public employee unions versus DeMaio’s three from building and construction associations — asked, “When it comes to the influence of various groups that lobby city hall, do you think there is a difference between business associations and public unions? If so, what do you think is the distinction? And how do endorsements influence a campaign?”

Dumanis had little to say on the subject, stating that she is proud that her endorsements are from leaders and people in management positions who have worked with her over the past 20 years and know of her integrity.

Regarding the city’s labor organizations, Dumanis said, “I don’t feel it is appropriate to ask for an employee endorsement from an organization that you are going to be sitting across the table from in the bargaining room. One also needs to look at where all of the money is coming from…and one has to be careful with the money that one gets, because no ‘pay to play’ should be happening in San Diego.”

DeMaio said, “This is an important distinction and defining element of the campaign because for so many years our politicians did not have the backbone to say no to the government employee unions. When labor negotiations occur, you need to know that your mayor owes nothing to the other side and will only fight for the taxpayers’ interests. We need to reform labor contracts.”

DeMaio then explained that negotiations with labor unions are the only meetings that occur behind closed doors, that taxpayers do not know the deal until it is too late and the city has signed a binding contract. “Maybe it is because of ignorance or because they want to accept the support, but when you see a politician accept the [endorsement] of government employee unions, you have to wonder, ‘Have they not been watching all these years, and see how we got in this mess?’...”

When it was Fletcher’s turn to respond, among other things, he said, “Since the first time I ran for office, I have said I would lay out certain principles and plans, and anybody that supports me is getting an investment in good government. Therefore, I am willing to take the support of anyone.” Fletcher has been endorsed by the police.

“Carl,” Fletcher continued, “you say you can’t take support because you would beholden to somebody, but you are the king of special interest money. You have taken more money from lobbyists and city hall insiders and developers than anyone on this stage.... [Y]ou have to acknowledge that all labor contracts have to be ratified by the council, and they are thoroughly debated.”

Drawing a few laughs from the crowd, Fletcher then asked the following question of DeMaio before handing him the microphone to respond: “My question is, have you ever met behind closed doors with any of those lobbyists, developers, or city hall insiders that have given you money, and discussed city business?”

DeMaio said, “I am proud of the support I am getting from rank-and-file San Diegans. I would absolutely dispute your characterization, as well as your statement that unions are not supporting your campaign. If you go to the websites of the unions that are trying to attack me, not only do they spread the same misinformation, but they promote the candidacy of all three of my opponents. I will let you judge for yourself....”

“You didn’t answer the question,” Fletcher responded. “The facts are the facts. I am proud to have the support of cops. I fought in a war, I watched people die, and I know the sacrifices [cops] make, so I won’t turn them away. I am consistent [on] my position, and won’t be influenced, [regardless] of who you are. But, Carl, you can’t come out and say no meeting behind closed doors and not answer the question [posed to you]....”

DeMaio took another opportunity to reiterate that labor-contract negotiations between unions and the city take place behind closed doors and provide no transparency.

“Again, you are not answering the question,” Fletcher said. “The straight-talk express got stuck in a pothole. It is really a simple point….”

The exchange was interrupted for the debate closing statements. Afterward, the San Diego Young Republicans announced that they would decide on an endorsement at their next meeting, and through a show of hands at the end of debate, it was clear that many members remain undecided between the candidates.