Carl Durant Lied About the CDs 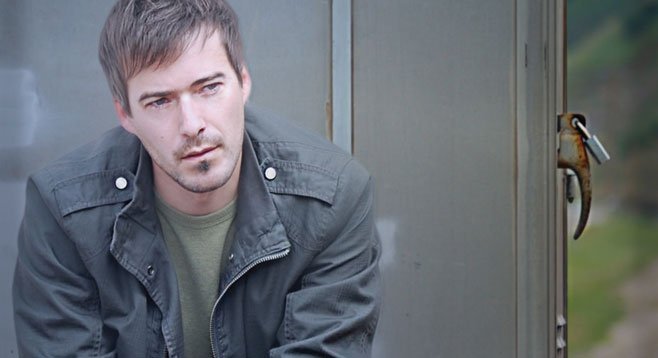 Originally from Belgium, Sorrento Valley–based singer/guitarist Carl Durant relocated to San Diego in 2002 to take a job with a newly founded electronics firm.

“Once I discovered the open-mic nights, I started turning up more and more with my guitar. It became more of a focus, especially my songwriting, which Cathryn Beeks encouraged when I started writing songs for ‘The Game.’”

Held approximately monthly, the Game is a songwriter showcase where Beeks provides a song title and several locals write and perform an original tune based on that title. Originated by Jeff Berkley, Steve Poltz, and Gregory Page, other Game participants have included Josh Damigo, Astra Kelly, Berkley Hart, Ken Lehnig, and Christy Bruneau.

Durant’s five-song EP Last Place was recorded at his home studio and mixed at ZenMastering. “I used a mellow production, to make it sound like a movie score,” he says. “Since it came out in April, I’ve played over 25 solo and band shows around San Diego, including the Orange County and Mira Mesa street fairs. We played for 250 people at the House of Blues in October with all-star drummer Bill Ray [Ike Turner, Tubby], and I played my first out-of-state show in November at Sky Bar in Tucson.

“Now I’m back in the studio to record my next EP, and I’m looking for people to collaborate.”

Carl Durant performs at the Acoustic Alliance showcase at Brick by Brick on March 11.

DESCRIBE YOUR MUSIC TO POTENTIAL COLLABORATORS

“I’ve been pitching my live band sound as Brian Molko of Placebo joins the Decemberists to play an electrified James Blunt cover, remixed by Moby.”

WHAT’S IN YOUR CD PLAYER?

1) Anton Walgrave, Every Night You Pray. “My favorite Belgian artist.”

2) Nick Cave, Dig!!! Lazarus Dig!!!. “A perfect mix of the mellow, the brooding, the more punk Nick Cave. From his Birthday Party band days to ‘The Ship Song’ era to now he has had an interesting, varied repertoire. And always good songs.”

3) Gregory Page, All Make Believe. “One of those gems I can always listen to from start to finish.”

ANYTHING ON YOUR PLAYLIST THAT’D SURPRISE US?

“One of my first ever, must have been in 1990 or 1991, was the Dutch band Tröckener Kecks at the Lido in Leuven, Belgium. Great, energetic show, but they also got the sold-out club so quiet that the only thing you could hear were the humming amplifiers and ventilation fans. And then everyone started singing along on the choruses, no instruments playing. Goosebumps!”

“When I was 14, on a weekend trip during the Christmas holidays with my scout troop in Belgium, I got a little crazy on shots of Bailey’s Irish Cream, and I was bathroom-bound for a good part of the night. Apparently my coordination was a bit off, too, and I didn’t make good friends with the guys that had to clean it up. I think I drank a little bit of beer the next morning, to try the ‘hair of the dog’ approach. There was no aspirin, and my head hurt so much.”

WHAT SONG BEST DESCRIBES YOUR LIFE?

“‘My Way,’ made famous by Frank Sinatra, but the Sex Pistols version: ‘Yes, there were times, I’m sure you knew/ When I bit off more than I could chew.’”

SOMETHING BETTER IN AMERICA THAN BELGIUM?

“You can return stuff to the store here!”

“Okay, I lied about the CDs. Those have been in rotation in the past, for sure, and for extended times, too. But recently I’m more into checking out new tracks on YouTube and SoundCloud, mainly local artists and new major-label releases. I confess I haven’t bought anything in awhile. I only buy full albums, so I have to like it as a whole before I’ll buy.”

WHAT DON’T WE KNOW ABOUT YOU?

“I published my PhD about integrated circuit design as a book in 2003. It made me a whopping $100 in royalties.” ■

Outtakes: BESIDES MUSIC, WHAT ELSE ARE YOU GOOD AT? “There’s a good chance that I will beat you at table tennis. No beer involved.”

BEST DAY EVER? “When the nurse told my wife and I that we were going to have boy and girl twins. That was at Scripps Green here in San Diego, around October 2006.”

WHERE DO YOU AND THE TWINS HANG OUT? “With a family with young kids, hanging out isn’t really an option. They need action. Best for that is a hike in Torrey Pines State Park, or hiking into the mountains, like Cuyamaca or Laguna Mountain.”

WHICH OF YOUR PARENTS’ TRAITS DO YOU SEE IN YOURSELF? “From my dad, his intellect and desire of independence, and being strict about following the rules. From my mom, the urge to take care of other people, and breaking a rule if it doesn’t make sense.”

WHO MAKES OUT IN YOUR WILL? “My wife and kids would get everything. Don’t know if they would keep my guitar, bury it with me, or just burn it. Some weeks, my guitar sees more of me than they do.”

FEARS OR PHOBIAS? “No squirming food for me.”

Thanks to Jay for a great interview! For an in-depth article about my songwriting: http://sandiegoacoustic.com/2011/carl-durant-in-that-groove-place

Four shows are planned in March, so check out the schedule (also on the website).