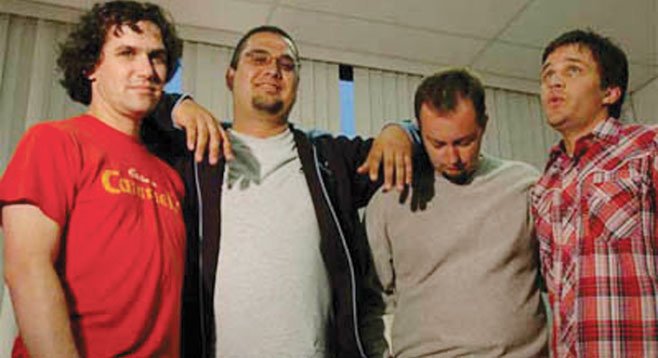 “After six years, we switched out some members and just lost momentum,” says Adam Gimbel of Rookie Card, who’ll play their first full RC set in four years at La Mesa’s Riviera Supper Club on February 29 (the apropos “leap year” date that also occurs once every four years). “It was hard to motivate to get restarted, so we just never bothered. I got busy with other fun things [Cover Me Badd] that were much easier to get people interested in, so I let that happen for a while.”

Over the first few years of the 21st Century, Rookie Card peddled their alt-country-crunchy sound all over town. After their What’s on Second? full-length was nominated Best Pop Album at the 2006 San Diego Music Awards, the band went mostly silent, other than a 2008 Whistle Stop set and a 2011 appearance at the Casbah performing Wilco’s A.M. album. “The Riviera show will mostly be Rookie Card songs,” says Gimbel, “but we’re throwing in a few fun covers for those who like to say, ‘I love this song.’ A couple of people remember our original tunes, but not that many.”

One song guaranteed a slot is the closest they’ve come to a hit single, their obsequious ode to leap-year birthdays, “2/29.” “I wasn’t born on February 29, and I’d never met anyone who was when I wrote it. But, I thought it might be kinda sad to be born on leap year and wondered if it might make someone sad for their whole life...if you think it’s rough being born near Christmas, try coming out on a day that doesn’t exist three years out of four.”

“I’m aging faster at a quarter of the speed/ my will to live don’t have a lifetime guarantee/ I wanna leap off the deep end/ I hope I fall on a weekend.”

“The song got mentioned in a syndicated leap-year news story that resulted in articles nationwide,” says Gimbel. “In 2008, Dylan [Martinez of Rookie Card] and I filmed ourselves performing the song and uploaded it to YouTube.” The clip was viewed around 10,000 times during its first week online.

“When Rookie Card first started doing the song, I’d ask if anyone in the audience was born on February 29. It took two and a half years before a leap-year baby actually showed up!”