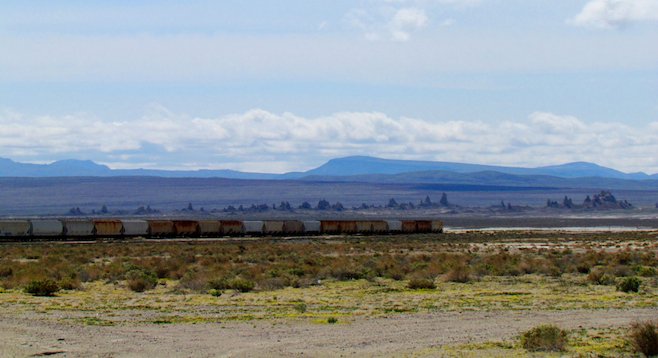 The Trona Pinnacles (not to be confused with Pinnacles National Monument near Steinbeck’s Soledad) is one of those natural geological wonders that awes.

Set back five miles off SR 178, twenty miles east of Ridgecrest, CA, on a dirt road, the 500 tufa (calcium carbonate) peaks – some as high as 140 feet – stand out for miles. As with those in Mono Lake, these towers were formed underwater more than 100,000 years ago when the surrounding area was at the bottom of Searles Lake, part of a chain of lakes that once stretched from Death Valley to Mono Lake.

The isolated “Cathedral City,” now a National Natural Landmark overseen by the Bureau of Land Management, is conveniently located en route to the western entrance to Death Valley. It’s a popular location for films and commercials, and is surrounded by almost 4,000 acres of mud flats with mountain ranges visible in the distance.

Isolated in the western Mojave Desert, the lunar landscape is a little eerie. No wonder then that the Trona Pinnacles was used as a backdrop for sci-fi films including Battlestar Galactica, Star Trek V: The Final Frontier and the recent remake of Planet of the Apes.

The roads may have been a bit rough on my Celica, but the drive in was well worth it. Hiking among the ancient pillars, I saw faces in stone at every turn. The ranger shook his head at me on the way in but stopped in his tracks nodding, seemingly impressed, as I exited a few hours later after hiking into the heart of the Pinnacles. My car was not among those that has found its nose buried in the sand wash.

Primitive campsites set beneath the steeples are available for up to fourteen-day stays. I planned my visit during a full moon, but the clouds prevailed. Nonetheless, images of Charlton Heston in a loincloth hovering over the heavy-lidded Maryland beauty queen Linda Harrison – AKA mute ape slave Nova – came to mind.

Can this be seen from Hwy. 395? Where are the railroad tracks going to/from? Off 395 just before Ridgecrest are some abandoned tracks with stored box cars. Wondering if pinnacles in that area - like in your photo?

Yes. The caption (which I am not able to insert or correct--that's done by the Reader) isn't actually true as it's not an active tract I don't believe. The box cars look as though they've been there forever. And, yes. The box cars as well as the pinnacles can be seen from the highway...but if you're not looking for them, you might miss them. Road was hairy on my Celica but I did manage to get it all the way in to be able to walk around the Pinnacles. It's a very cool, very quiet place--or was when I went. Check out the website for the specific location. Sounds like you are talking about the spot. Hope this is helpful. http://www.blm.gov/ca/st/en/fo/ridgecrest/trona.html