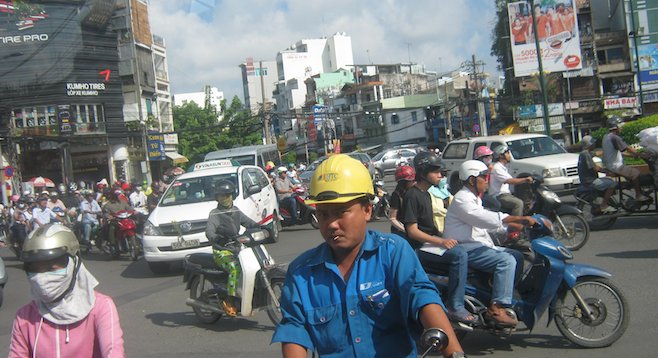 "In Ho Chi Minh City, there are eight million people and five million motorbikes," my guide informed me as we slowly wound our way through this bustling city en route to the Củ Chi tunnels.

“No motorbike, no girlfriend,” he asserted somewhat wistfully, adding that he had neither.

It is helpful to keep in mind the vast number of motorbikes when attempting to cross the streets here, because it is likely that one of them will come whizzing by extremely close.

There is, in fact, an art to crossing the street in Ho Chi Minh City that should be mastered to prevent one from being flattened. You move at a steady pace, allowing the motorbike rider to maneuver his way around you. Watch the locals. Not only have they mastered this art, they are incredibly resourceful and creative at transporting items of all shapes and sizes on the bikes.

This is not a city of walkers, but if you do venture out on foot, the plethora of motorbikes necessitates caution on the part of the pedestrian. It’s better to walk, take a taxi or hop on the back of a motorbike driven by a local than to attempt to drive one yourself – if you value your life and peace of mind, that is. If you tire of taxis and walking, you can take a cyclo pedicab tour of the city for about $10, but be wary of scams.

Ho Chi Minh City is a young, vibrant and energetic metropolis. There is a thriving market economy. Modern office towers and skyscrapers dot the skyline. A palpable optimism for the future characterizes the local vibe (especially for those with the means to snag one of those motorbikes). Despite the economic progress, there is poverty here and Westerners will inevitably be approached by beggars and street children.

HCMC also has a past that intersects with U.S. history in a somewhat awkward way for visitors. The War Remnants Museum is a look at the Vietnam War from the Vietnamese point of view. This means that America is depicted as the bad guys – the invading imperialists. But there is, nevertheless, plenty of material from that time period to make this a worthwhile stop for anyone who finds the subject of interest. Just be prepared for the anti-American perspective.

Actual military hardware, including planes, tanks and helicopters, dot the courtyard leading to the entrance of the War Remnants Museum. Innumerable photos and documents bring the war alive in an informative and often dramatic way.

One of the more poignant pair of photographs that stick in my memory were of a Vietnamese child wandering through fields contaminated with Agent Orange, the defoliant used by the U.S. Army, along with a second photograph flashing forward two decades when his nearly paralyzed, ravaged body is assisted by his own son. I left the museum with a heavy heart at the effects of the war but a greater understanding and appreciation for what the American soldiers and the Vietnamese people endured.

The Reunification Palace provides an interesting glimpse into the government offices of South Vietnam during the Vietnam War. You can enter the banquet chamber, president’s office and even the war command room in the basement. In the latter there are period typewriters still resting on the desks.

A helicopter on the roof is a copy of one used by South Vietnamese President Thieu during inspections of areas affected by the war. The helicopter in particular evokes thoughts and images related to that time. It appears that little has changed here since 1975 when the government fell and the war ended.

The Museum of Vietnamese History has artifacts from 2,000 years of Vietnamese history and a water puppet theater. Another popular spot for visitors and locals alike is the Bến Thành market, where you can purchase local food, flowers and innumerable other items of interest. You can use U.S. dollars for your purchases. It's better, however, to carry dong, the local currency, as this makes it easier to bargain the marked price down 20-30%.

Ho Chi Minh City refers to the entire metropolis, but the commercial center is still called Saigon by locals as it was during the war. Despite the youthful, modern nature of HCMC, there are many older traditional buildings. As with Hanoi, the French influence is apparent in much of the architecture and the wide boulevards. Some notable buildings from the French Colonial era are the Saigon Opera House and the Notre Dame Cathedral.

Cholon is the Chinese ethnic market. There are several intriguing pagodas in this district as well. A statue of Ho Chi Minh stands in a central city square. He is with children, portrayed as the benevolent protector, “Uncle Ho.”

Befitting its youthful population, Ho Chi Minh City has a lively nightlife. Clubs remain open well past midnight. Western-style luxury hotels and glitzy restaurants are dotted throughout the city but, as throughout Southeast Asia, accommodations can be found at very low cost.

In Vietnam (as well as Cambodia and Thailand) I rarely spent more than $20 a night for a room. Street food is also widely available for those on a budget. Banh mi is a local favorite – grilled pork inside a baguette. Also try the local staple noodle soup, pho, for breakfast and eat like a local.

From Ho Chi Minh City, it’s easy to arrange side trips to such points of interest as the Mekong Delta and the Củ Chi tunnels. The Củ Chi tunnels provide a fascinating look into the methods used by the North Vietnamese to evade the Americans. An intricate system of tunnels form a labyrinthine web used effectively by the Viet Cong to shield themselves from the bombing onslaught. We were allowed to enter the tunnels and experience the cramped nature of existing down there. (This is definitely not recommended for the claustrophobic.)

Unlike Thailand, you need a visa to enter Vietnam. You can pick one up before your visit or arrange online in advance to pick one up at the airport. It’s well worth the effort to visit this country. Not only is it an experience you’ll never forget, but it’s much more affordable than visiting Europe.