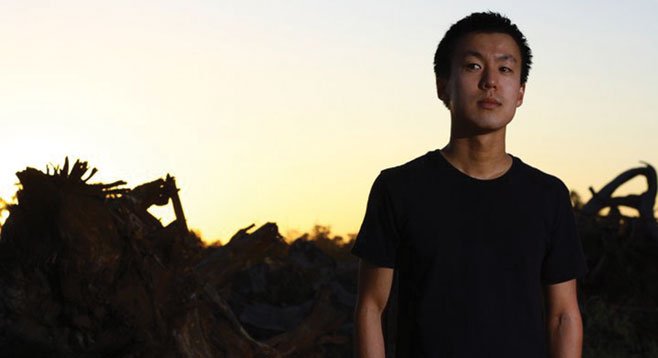 Dan Harumi (aka Room E), a 26-year-old Bay Area native, recently released his debut full-length, Penguin Child, which makes use of live and electronic sounds in what he calls a “dilettante-style instrumentation” — a pastiche of turntables, drum samples, xylophone, pump organ, melodica, accordion, synth, electric bass, Ableton, and “random stuff around the house.”

“Instead of a hi-hat, I made a recording of tapping on a water bottle with a pen and EQ-ed it to make it sound cool,” Harumi says. “I also used a field recorder to get doors slamming shut or a bike on the concrete and then put them into Ableton. Once you have the sound in front of you, you can use it as a drum or pitch it up and down to create a melody.”

In addition to found sound and household percussion, Harumi recorded jam sessions with drummer Mike Hams (A Scribe Amidst the Lions, V Drago, Brian Ellis Group) at Control Center for the Sun Studios, chopped up the recordings, and built songs around the beats.

“The album continues on themes first presented in Lanterns, namely the use of an elegant, baroque tone within the context of contemporary beat music.” Harumi writes on his website.

While finding parallels with the L.A. beat crowd, Room E readily branches off on tangents of ambient pop, drum and bass, afrobeat, IDM, jazz, and post-rock, alternately reminiscent of Squarepusher, the Brainfeeder roster, Boards of Canada, and the Cure.

Despite his kindred rhythm with the local and L.A. beat sounds, Harumi says he’s mostly shared lineups with bands. “I’d like to see people and genres come together a little more.”

Using Ableton as a tool to arrange live instruments rather than purely electronic sounds and performing with a live setup of turntables, MIDI keys, a Kaoss pad, and a laptop, Harumi says, “I didn’t really aim to make an electronic album, so I don’t really emphasize the electronic aspect as much. I try not to think in terms of genre when I’m making music.”