Verna Clark is never really sure how fast she's going 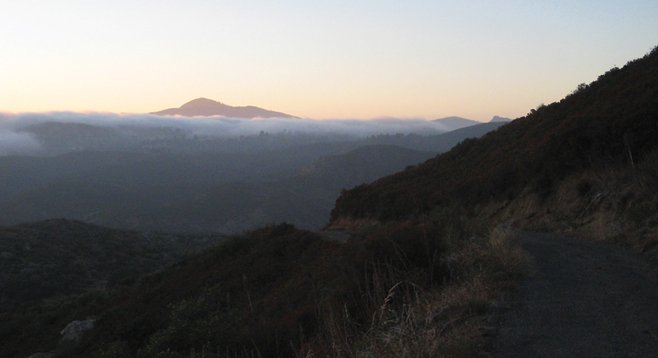 What do you like about your car? It gets good gas mileage.

Is there anything you don’t like about it? It’s kind of a piece of junk, but it’s affordable. And none of my gauges work, so I’m never really sure how fast I’m going or how much gas I have left. It’s kind of an adventure.

What else have you driven? I drove a 2000 Ford Taurus for a long time and a Mitsubishi Spyder Eclipse. That was my fun car.

What do you listen to while you drive? The radio. Music, typically.

What’s your favorite drive in San Diego? I really like driving the Sunrise Highway up to Mount Laguna.

What’s your least favorite drive? The 15, between, like, Mira Mesa and Normal Heights, so Mira Mesa to University or Adams Avenue. It’s pretty awful. That’s where I hit the worst traffic. There and, when I lived in Santee, driving from there up the 52 was pretty awful.

Do you have any ticket or accident stories? I think I’ve actually only gotten fix-it tickets in the last 12 years.

I was stopped at a stoplight, exiting a freeway, and a 19-year-old kid rear-ended me. So we pulled over and got out, and the kid was freaking out. He kept saying, “Oh, my gosh. Oh, my gosh. My dad’s going to kill me. Oh, my gosh.” He was in his dad’s car. He had no idea what to do or where his insurance was. I reminded him that insurance is normally kept in the glovebox, so he ran over to check there, and there it was. I asked if he wanted my insurance and he said, “No.” I strongly recommended that he take my insurance card, and then he asked me what to do with it. So I handed him a pen and a piece of paper and told him what to write down. It amazed me that you’d let your kid drive your car without knowing what to do in an accident because they were texting.

He was very lucky I was his first accident, not someone who was trying to take advantage of him.

Also, I once hit a surfboard on the freeway. The truck in front of me ran over it and it went airborne. There was nothing I could do. It was terrifying. And it left surfboard wax all down the side of my car.

What’s your dream car? I want a [Porsche] Cayenne and I want it to be a hybrid. It’s pretty and it goes fast and it’s a hybrid.

What’s your favorite shortcut in San Diego? I can’t say I know any! My smartphone tells me where to go.

You said you’ve lived other places. Is there anything different you’ve noticed about driving here? People freak out when there’s rain or fog or anything like that. So there are people driving 20 below the speed limit and people who are still going 90. It’s kind of a crazy situation.

But for the most part, I think San Diegans drive well. I lived in Iowa for awhile, and Iowans don’t drive well. They don’t drive fast, and they don’t look where they’re going. They can drive in the snow; that’s about their only advantage.